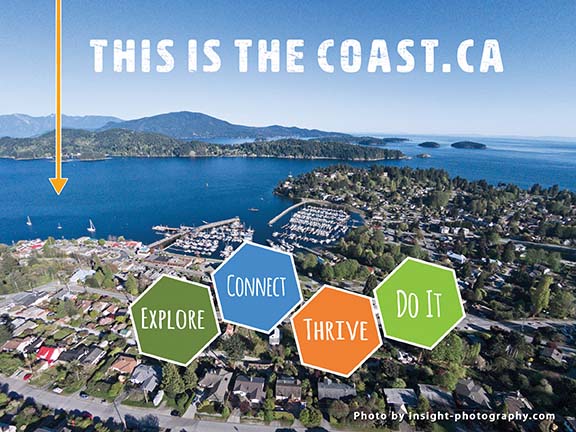 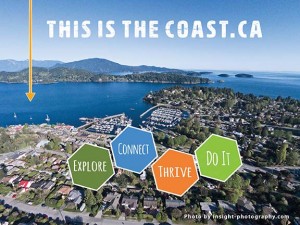 Here’s a challenge: Come up with a strategy to help boost the Sunshine Coast economy by bringing skilled and entrepreneurial young people to this community—but do it without relying on government funding or corporate branding.

“This is the Coast” (ThisIsTheCoast.ca) is the brainchild of a group of tech-savvy Coasters who developed the idea along with a few established local entrepreneurs, who also threw in $25,000 to help it come to life.

“A group of business leaders had been meeting off and on about economic development and got thinking about what they could do to promote the Coast,” said Richard Hoath, a local digital developer. “As founder of the Sunshine Coast Tech Hub, I got invited to come along.”

The group came to the conclusion that people aged 30 to 45 would make the most sense to try to attract. So Hoath put the creative dare to his friends in the digital community, including Laurie McConnell, who has run her Coast-boosting website, BigPacific.com, since 1997.

Now, just three months later, the product is a state-of-the-art website that’s friendly and enticing. It’s also free of the glossed-over exaggerations that weigh down many pitch sites trying too hard.

The site aims to “tell the real story of life on the Coast, because it’s not for everybody,” Hoath said.

This Is The Coast says straight up that if you love nightclubs, hate rain, are turned off by ferry travel and want to eat at new restaurants every month, look elsewhere. But it adds that if you’re drawn to a family-friendly, relatively affordable, mild-wintered, outdoors-oriented place with readily available 100-megabyte-per-second internet, read on.

A fun infographic on the site helps sort out who would be a good fit to live and work here.

This Is The Coast also goes a step further in its informal “vetting” process by connecting curious potential residents to people who already live here.

“How we invite people to the Coast has a huge impact on the sense of community,” said McConnell. “We’re hoping by putting this step into the process of people researching a potential move, that when they do come, they experience that sense of community right away. They find their tribe and fit in.”

And it’s getting results, with more than 1,700 unique visitors to the site in its first 12 days, McConnell said. And a number of connections have already been initiated with people who’ve responded on the site.

“Based on their interests and what kind of background they have, we’ve found someone for them to talk to. We’re going to be tracking all that on how that works out.”

If you click on the discreetly placed “about” link at the bottom of the website and watch the video there, it’s obvious who the “angels” are who quietly ponied up the cash for the project.

McConnell added that the creators also helped the bottom line by billing for many fewer hours than they actually put in.

Promotion of the site is largely social-media driven, as you’d expect for an online project with no advertising budget, so any way that locals want to help out would be appreciated.

Hoath suggested people just post the link to the site within their network.

“It’s really about the power of social networking to get the word out. That’s the most genuine way of doing it.” Rik Jespersen