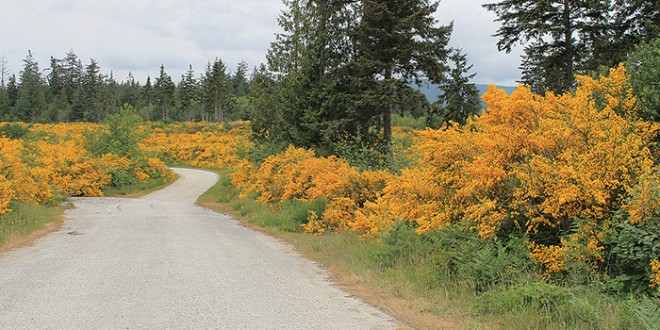 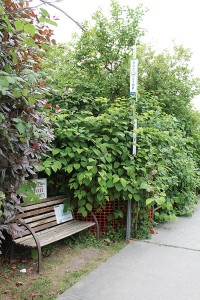 A bus stop on Dougall Road in Lower Gibsons is on the verge of being swallowed by knotweed, a destructive invasive species that is particularly difficult to remove. Donna McMahon photo

The month of May has been declared Invasive Species Action Month in BC, but progress in repelling invaders on the Sunshine Coast is bedeviled by regulatory and jurisdictional issues, lack of funding, and lack of disposal options for cuttings and contaminated soil.
At an information meeting on Invasive Plants on May 16 at the Sechelt Band Hall, citizen frustration was evident. Keynote speaker Jennifer Grenz, Executive Director of the Invasive Species Council of Metro Vancouver, gave information on 12 invasive plant species, but focused much of her presentation on knotweed.
Japanese knotweed spreads rapidly, displacing native plants and choking estuaries that are critical to salmon spawning.  The plant can grow from tiny stem fragments spread by mowers.  Roots will travel underground across roads and highways, and the stalks can penetrate concrete, damaging pipes and foundations.  Still worse, the Sunshine Coast has a new knotweed hybrid known as Bohemian knotweed that also spreads prolifically by seed.
“It creates a complete devastation of biodiversity,” said Grenz, showing slides of areas overrun with towering stands of knotweed that have eliminated every other plant.
“Somebody told me earlier in my career: don’t worry because there’s no such thing as a weed-related emergency,” said Grenz.  “But I’m telling you that that’s a weed-related emergency!”
Grenz also warned property owners that BC Assessment is looking closely at knotweed.  In the UK, even a single stalk of knotweed on a property may prevent a homeowner from obtaining a mortgage or insurance. 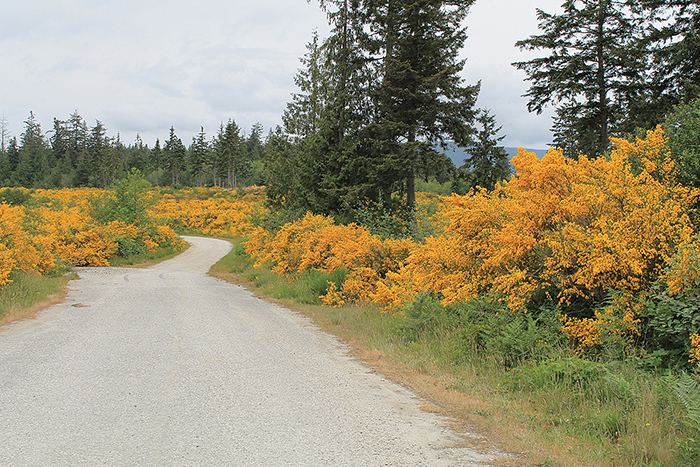 A field of broom at the Sechelt airport. The yellow-flowered invasive plant has crowded out almost all the native vegetation. Donna McMahon photo

Small patches of less than 30 stalks can be treated with manual cutting, but the only successful treatment to date for larger sites is application of systemic herbicides like glyphosate (Roundup) to the leaves or by injection into the stems.  However, herbicide may not be used within a metre of permanent water, such as streams.  And many citizens are reluctant to use chemicals.
Homeowners who want to dispose of cuttings have few options during the backyard burning ban between April 16 and October 14. Salish Soils no longer accepts knotweed, giant hogweed, ivy, or broom, and the Sechelt Landfill is not taking knotweed or broom. And there are no local sites for soil contaminated with knotweed roots; under the Environmental Management Act, it must be shipped off coast for disposal.
For now, the SCRD is advising people to cut the weeds and lay them out on tarps to dry until they can be burned in the fall.
“There are consequences if we don’t do anything,” stated Sid Quinn, shíshálh Nation Resources Director. He has inventoried invasive plants on Band lands in Sechelt, and spoke at the May 16 meeting of his concerns about potential loss of aquatic habitat, soil erosion and impacts on forestry and agriculture.
The SCRD created an Invasive Species Technical Working Group in January 2015 to coordinate efforts of government agencies, but Sechelt and Gibsons have no budget for invasive species and the Ministry of Transportation and Infrastructure (MOTI) has a budget of only $2 million for the entire province.
“Paying people to work on it costs an awful lot of money, so we have to make it possible for volunteers to work on the problem,” said Lorne Lewis, SCRD Area E director.
Elphinstone volunteers are working with MOTI on a site at the mouth of Chaster Creek.  And other groups are experimenting with treatment options.  The Town of Gibsons has planted treatment sites with cedar to see if it can compete, and the Ruby Lake Lagoon Nature Reserve Society is working with SFU on shading tests at John Daly Park.
But in the meantime, knotweed continues to spread.
“Knotweed is growing along Redrooffs Road, about 150 ft from my home,” said Halfmoon Bay resident, Alison Taylor. “Last year, someone went to the trouble of tagging it, but there’s been no sign of treatment.
“I used to be opposed to the idea of using pesticide, but now that I know more, I’m thinking it’s better to use a bit of pesticide now than be forced to use lots of pesticide later.”
More information on invasive plants can be found on these sites:  SCRD (scrd.ca), Coastal Invasive Species Committee (coastalisc.com), BC Invasive Species Month (bcinvasivesmonth.com) and Knot on my Property (knotonmyproperty.com).
Donna McMahon

Correction: Jennifer Grenz is no longer the Executive Director of the Invasive Species Council of Metro Vancouver and was not representing Metro during her presentation in May, but as a private contractor/expert.