Posted by: editor October 2, 2014 in Arts & Entertainment Leave a comment 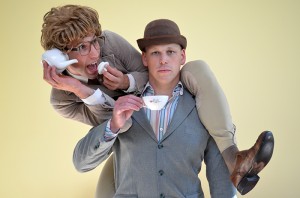 It’s more than any old mad hatter’s tea party. It’s the James and Jamesy show, touring their latest creation High Tea, at the Gibsons Heritage Theatre in Gibsons this Wednesday to Sunday, October 8 to 12.
British and physical comedians, Jamesy Evans and James Brown give audiences their laugh value, many Canadian entertainment reviews note. From sight gags to cultural shenanigans and wacky skits, they aim to entertain comedy fans.
The show is a national sensation garnering a five-star review from the London Free Press, and winning awards across the country, including Best of Fest in Vancouver, Best Script at the Montreal Fringe, and Best Comedy at Victoria’s fringe theatre festival.
The duo are good at mixing traditional comedy themes with their own twist on physical comedy and British culture in its world-wide manifestations. So buckle your theatre seats for a real fun ride as James and Jamesy are getting ready to bring Gibsons the kind of fun people have been enjoying at festivals all over Canada. Tickets are $18 for adults, $10 for kids and are available at Strait Music Sechelt, Gaia’s Fair Trade in Gibsons, MELOmania in Roberts Creek and online at JamesandJamesy.com/tickets
The October 8 to 12 show times are 7:30 except on Sunday when they play a 2 pm matinee.
Apryl Veld