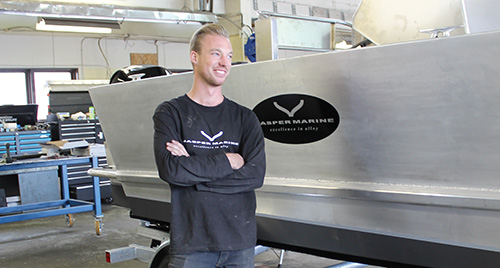 “I like to build things that inspire me,” says Jasper Vermeulen. So much so, that the 26-year-old has launched his own boat building business, Jasper Marine, that promises to become a leader in innovative marine design.

Boats are in Vermeulen’s blood. The family is Dutch, and Jasper’s paternal great grandfather was the captain of a trading ship. Jasper grew up around boats on the Sunshine Coast and loved them.

A graduate of Elphinstone Secondary, he started welding at school and then went to Okanagan College in to become a certified journeyman A-Level welder. While working in Kelowna, Jasper began fixing up boats in his spare time and realized that there was a way to combine his skills in welding and his love of boating—building aluminum boats.

Until recently, most aluminum boats on the BC coast have been work boats, built from designs that barely changed from decade to decade, so Jasper went to Holland, Croatia and Spain in search of new ideas. In Holland, he found an “amazing” tradition of boat building, and a wealth of innovative aluminum designs.

“There’s so much out there in the aluminum boating industry that just doesn’t exist here,” said Vermeulen.

In 2015, using money he earned in the Alberta oil fields, he moved to New Zealand and took a job with Q-West Boat Builders, building aluminum yachts and tenders. A year later he returned to Canada and started building his own boats in a garage on Nelson Island. Vermeulen successfully built and sold two 18-foot boats, but he needed a properly equipped workshop, so he and his father, Nick, scoured the Sunshine Coast for suitable space.

They finally found a vacant industrial property in Gibsons which at one time housed the Gibsons public works yard. The lot is slated for redevelopment and the lease is month-to-month, but it has given Vermeulen a high-ceilinged workshop for manufacturing and office space. In this location, he is currently working on a 25-foot landing craft, custom designed for a client who wants to load up his ATV and go hunting in remote areas.

Vermeulen explains that while it costs more to build boats with aluminum than fibreglass, aluminum is a far better value because it’s stronger and will last virtually forever with very little maintenance. Ninety percent of all the aluminum boats ever built are still in use today, he says.

It’s also a better environmental choice. Damage is easy to repair, the boats can be modified and repurposed, and aluminum can ultimately be recycled, unlike fibreglass, which is piling up in landfills across North America.

“This year we went to the Vancouver boat show and 60 per cent of the floor was aluminum boats. It’s becoming more and more the norm.”

While he loves living on the Sunshine Coast, it’s not without its challenges. “There a desperate need for commercial space that’s affordable, and not just for the boating industry,” said Vermeulen.

He has also had to build a supply chain for everything that goes into a boat, including the engine, flooring, and interiors. Custom items such as curved glass have to be shipped in, and even painting is a challenge, since the local automotive paint shops aren’t big enough to hold a boat.

While the vision for Jasper Marine is all Jasper’s, the business is also a family affair. Jasper’s mother Marleen, a well known artist, helped him with his logo and branding, and his brother Dolf contributed professional photography and website design. His father Nick has been his business coach, and this fall he will pick up a lot of the office work so that Jasper can concentrate on building.

The future looks promising. Vermeulen would like to grow Jasper Marine into a company that builds forty boats a year, and make a name in the industry for his own unique and distinctive designs. – Donna McMahon

2017-11-08
The Local Weekly
Share !
Previous: Sipping the Sunshine Coast
Next: Caterers on the Coast