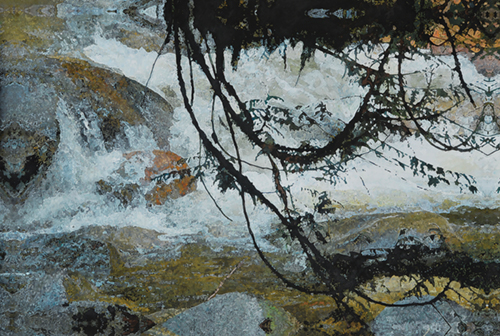 Posted by: The Local Weekly April 11, 2018 in Arts & Entertainment Leave a comment

An exhibit of local artist and educator Kevin McEvoy’s artwork opens at the Gibsons Public Art Gallery April 12. McEvoy is known to many as “the art teacher,” first at Chatelech Secondary, and now for the last 12 years, at the Sunshine Coast Alternative School. But McEvoy, who enjoys teaching, has always striven to balance his job with pursuing his own art practice, something that can be difficult to do. “It’s a rare thing for a teacher to continue to paint and do their art once they start teaching at a job because they’re too tired,” says McEvoy, recalling the words spoken to him by Gordon Smith, a professor of his at the University of British Columbia. Smith, who is a Governor General’s Award winner and a member of the Order of Canada, was influential in keeping McEvoy on a career path that included teaching and making art. “I always remembered his advice,” says McEvoy. “I watched him do it and he’s one of our most decorated artists.” 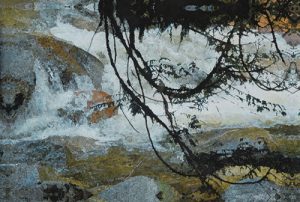 Kevin McEvoy’s “Chapman Creek Rapids”, an oil on canvas that measures 50” x 60”, took over a year to complete. Photo submitted

As a teacher, McEvoy finds inspiration from his students. “They’re fresh, they’re always thinking of new approaches to old ideas,” he says. “They inspire me to try new things.” His upcoming exhibit, titled New Directions, will feature some of the new things McEvoy has been trying in his practice. Over the years, he has experimented with various mediums, including painting, pastel, photography and print making, always fascinated with technological advances made in the field of art making. For the last two years, McEvoy has been working on a technique that involves photographing scenes in nature, manipulating the images digitally with software, printing the images, and then painting them. “I want it to be a blending of what the machine – the computer – can do and what humans can do,” says McEvoy. “I paint on the original so there is no copy. It’s one of kind.” Though it may sound like a simple technique, it’s a labour- intensive process, especially as McEvoy tends to work on a large scale. “You’re painting with a very small brush and it’s a very large surface,” notes McEvoy, who uses oils or acrylics when painting, depending on his time frame. “This is where the creativity really starts,” he says. “As you’re painting, you’re changing things, not copying faithfully what you see.”

New Directions by Kevin McEvoy runs April 12 to May 6. Opening reception on Saturday, April 14, 2-4pm. On Sunday, April 22, from 2-4pm, McEvoy will give a hands-on workshop on stone lithography, a unique opportunity to experience a technique over 200 years old. Both events are free and all are welcome.