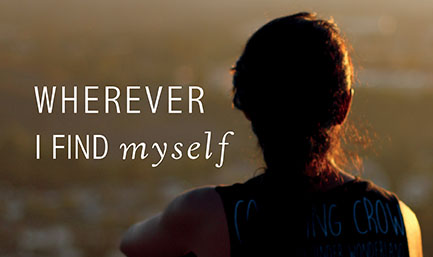 Posted by: The Local Weekly May 10, 2017 in Uncategorized Leave a comment

As Miriam Matejova, editor of Wherever I Find Myself (Caitlin Press), notes in her introduction, these are tough times for newcomers given the rise of anti-immigrant sentiment around the world. Subtitled Stories By Canadian Immigrant Women, the 24 pieces in this collection by women from 20 different countries, cover a lot of issues. Coming to terms with a new language is one, as in Camila Justino’s humourous and insightful look at her uneasy relationship with the English language. “You name me an immigrant,” she tells her new language. “And when I am an immigrant I am nothing else.” These stories are all about fitting in, in one way or another. Being constantly seen as ‘other’ and ‘different’ is exhausting—trying to flatten out accents, eat the “right” foods, change hair styles, clothes, adopt new customs in order not to stick out quite so much. As Diana Manole discovers in “Mititei” on a visit to her native Romania, such efforts can have unintended consequences. “An emigrant in sheepskin,” she realizes, “fools as few as an immigrant in jeans.” Canada becomes a place of hardships and triumphs, a place where concepts of home are challenged and identities remade. These women have important stories to tell that, unless you are an immigrant yourself, run outside of the usual experience.

Also writing from a perspective outside the mainstream is author Michael V. Smith, with his latest book, Bad Ideas (Nightwood Editions), being a collection of poetry. Readers tend to shy away from poetry, preferring instead the usually sure-footed world of narrative. Which means many might not read Smith’s book, and that’s a shame as these poems have plenty of stories to tell. Smith tackles a number of topics: his problematic relationship with his father, his sexuality, mortality, his place in the world as it is and as he dreams it. While acknowledging his white male privilege (he is a professor at UBC Okanagan), there’s no doubting Smith is an easy target for some, given how openly, honestly and unapologetically gay he is. “Handy Tips to Limit a Queer’s Chances of Being Gunned-Down” contains some rather sagacious advice for everyone, none perhaps more poignant than Strategy 2: “Make more space/for outsiders more outside/than you.”

Both these books, published by local publishers, give us an important glimpse into who we are – and could be – as a society. That is something outsiders often do better than we can: show us something of ourselves seen through clear and unsentimental eyes.