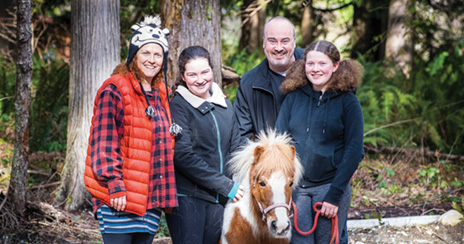 Mark Yellowley, co-owner of Wheatberries Bakery, is all too familiar with the ups and downs of business cycles. But when he became a Loans Manager at Community Futures, he realized he’d come full circle.

Mark and his wife Jane arrived on the Coast in 1994 determined to create “something” together. “We had always dreamed of starting a small business,” says Yellowley. They found a property at the top of Agnes Road in Roberts Creek that had a unique 600-square-foot out-building that they converted into a commercial kitchen and started baking, distributing goods wholesale, and opening up on weekends to sell directly to customers. He’d be rolling out bread as customers bought breads, muffins and cookies. “We’ve always been interested in connecting customers with seeing food being made,” says Yellowley. “When we stop [making from scratch], we lose the connection to where our food is coming from.” The Yellowleys were also filling a growing demand by providing delicious products made from quality ingredients, organic flour, and non-GMO canola oil. “We saw people cooking like that at home but there wasn’t anyone dedicated to it in the marketplace,” he says. For two years, they sold their goods from “the bakery in the woods” before opening up their first shop in Gibsons in 1998.

Integral to Wheatberries success is the assistance they received from Community Futures. Through them the couple took a business-plan writing workshop; Jane enrolled in a self-employment business program; and during their first three years of operation, they received four different loans, giving them access to capital that they couldn’t get through the banks. Their business grew and now there are three more Wheatberries locations: inside Sechelt Hospital, in Davis Bay, and the one at the Langdale Ferry Terminal which is under a licensee arrangement (“It’s owned by someone else but we do all the baking for them,” explains Yellowley.) As the business grew, Yellowley empowered his management team to run their locations, allowing him, for the most part, to step back from day to day operations.

Having a strong team in place at Wheatberries is what made it possible for Yellowley to take on the Loans Manager position at Community Futures, this after 10 years of being a board member and 12 years as a member of the loans committee. After 22 years in business, Yellowley now finds himself sitting on the other side of the desk from where he began. He estimates he sees between five-10 clients a week in addition to talking to five-10 entrepreneurs on the phone. “Sometimes it’s established business owners who are looking for funding. Sometimes people need access to resources. Sometimes people are looking to buy or sell a business, or they want you to look at their business plan,” he explains of some of the work he does.

While he believes the Sunshine Coast is a great place to do business, there are some challenges, most notably the current “dire” shortage of workers being felt by a wide spectrum of businesses. Yellowley believes the worker shortage is tied to the lack of affordable housing. “If you want to move to the Coast, how do you find a place to live?” he asks. “How do you afford it?” There are also a number of Coast businesses for sale at present which Yellowley thinks is being motivated by two things: people buying because they want to move here and see an opportunity, and current owners retiring or moving on in the absence of key workers. “It’s a good time to be considering trying to marry your own succession plans with people that really want to be here and be self-employed,” he says. “Current owners could be seeing that it’s a natural time [to sell] if it’s really hard to find key people and if you’re not interested in being that key person yourself.” There are also many people looking to start new businesses. “We’re seeing a lot of social entrepreneurs, people who are modelling their business in ways that achieve not only a financial success, but that meet a social need in our community so that we make the place that we live better.”

Yellowley himself continues to do his part in making the Sunshine Coast a better place, providing quality food through his bakery, through donations, volunteering, mentoring, and now through his work at Community Futures supporting new ideas and businesses. “In life we all want to feel that we’re contributing to something, whether it’s our community or other people’s success,” he says. “I feel like the fortunate one.” Community Futures 604-885-1959.