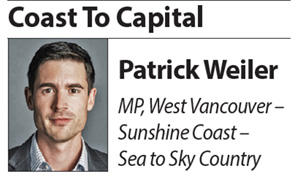 While the response to the COVID-19 pandemic remains the primary focus of all orders of government in Canada, there are two other health matters I will be updating you on this month.

I have heard from hundreds of constituents on this important issue, many of whom have relayed their personal experiences that inform their views on how MAID should be addressed in Canada. I thank them for their input they brought to the table as we seek to ensure our laws reflect Canadians’ evolving values, including in supporting their autonomy and personal freedoms while protecting the most vulnerable.

Over 300,000 Canadians provided feedback, and 120 expert witnesses provided testimony during the 2020 consultations. This thorough process shaped the following major changes:

• Removing the requirement for a person’s natural death to be reasonably foreseeable to be eligible for MAID, so it can be compliant with the 2019 Superior Court of Québec’s Truchon ruling.

• Introducing new and strengthened safeguards for those whose death is not reasonably foreseeable.

• Temporarily excluding individuals suffering solely from mental illness for 24 months from eligibility for MAID until an expert panel makes recommendations on protocols, guidance and safeguards for MAID for such persons.

• Other issues such as advance directives and mature minors must still be explored in a forthcoming Parliamentary Review later this year.

Our government continues to work with the provinces and territories on establishing a National Pharmacare Plan, guided by the Advisory Council on the Implementation of National Pharmacare. Given that healthcare is the exclusive domain of the provinces, we cannot impose pharmacare on them. Rather we are working to transform a patchwork of over a hundred drug plans into a single universal pharmacare program. Significant progress has been made since the Transition Office was established in 2019, including the issuance of new rules on patented drugs which will save Canadians an estimated $13 billion through negotiations by the Canadian Drug Agency and a $1 billion national strategy for high-cost drugs for rare diseases. These discussions and negotiations will continue this year as we work to expediate progress and come to an agreement. This will be the most significant change to our health care system in decades, and our government is determined to get it right.

I know these two issues are of considerable interest throughout the Sunshine Coast, and I welcome all feedback, thoughts and comments on these and all matters:  6367 Bruce Street, West Vancouver, V7W 2T5, 604-913-2660, Patrick.Weiler@parl.gc.ca