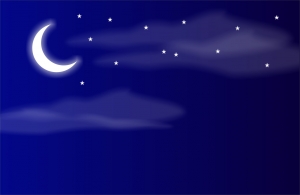 Posted by: The Local Weekly March 21, 2018 in Stargazing Leave a comment

By April 1, Venus will be an “evening star”, setting nearly two hours after the Sun. Mercury will be about 4° above Venus in the dusk. On April 2 Mars will pass 1 1/4° below Saturn just above the constellation Sagittarius. On April 7 the waning moon will hang 1° above Saturn in the morning sky with Mars within 4°. Mars is slowly approaching the Earth, and on April 20 its disc will exceed 10 arcseconds diameter for the first time since September 2016. The waxing crescent moon will be 5° below and to the left of Venus on April 17 at dusk. The next evening the moon will be in the Hyades cluster below and to the right of Aldebaran. Jupiter will be rising in the southeast at midnight earlier in April and by the end of the month will be rising about 10pm.  On April 22,  the Lyrid meteor shower peaks in the pre-dawn hours: this meteor shower is caused by dust from the long-period comet C/1861 G1 Thatcher and creates between five and 20 meteors per hour. On April 30, the nearly full moon will rise 6° from Jupiter at sunset.

On April 13 at 7:30pm, at the Sunshine Coast Art Centre, 5714 Medusa St., Sechelt, the Sunshine Coast Centre presents Stanley Yen from TRIUMF at UBC, whose topic will be Supernovae. Specifically, Stanley will be describing the detection of neutrinos from core-collapse supernovae in our galaxy. Admission is free: donations gratefully accepted at the door.

The Sunshine Coast Centre of the RASC is now offering the Explore the Universe Observing Program to the public for free. This is open to both the public and members, and can be accomplished using nothing more complicated than binoculars. On completion, you earn a certificate and observers pin. Contact the Centre at info@coastastronomy.ca or check out the national RASC site here for details: https://www.rasc.ca/explore-universe

2018-03-21
The Local Weekly
Share !
Previous: Brainstorming solutions to poverty
Next: Keeping your dog safe in the wild