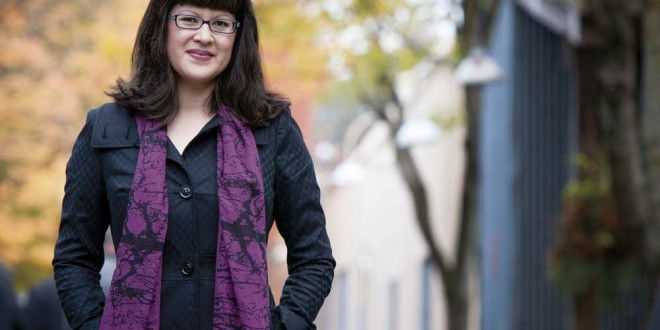 Posted by: The Local Weekly March 4, 2015 in Arts & Entertainment Leave a comment

(Nancy Lee teaches in the Creative Writing program at the University of British Columbia. Her first book of fiction, Dead Girls, in 2002, was named Book of the Year by NOW Magazine. She read at the Arts Centre in Sechelt on February 28 from her new novel The Age.)

Nancy Lee’s stories are set where people are. Urban, usually. But they’re full of the nitty gritty of place, which urban stories often lack. There’s always the clash, of humans on landscape, mud and metal, and the clash of humans on humans, relationships and recklessness and the kinds of authority that are like brick walls. For us mossy forest types this grit acts like a breath of less-fresh air. Her writing is superb, clean and restrained, clever and sympathetic.

There are threads of political protest in Dead Girls and it is a strong theme in The Age. Lee allows the reader to be confused by it all, right alongside her protagonists. The Age is set in 1984, a year bound to be fraught with Orwellian overtones, and when Soviet warships swarmed the North Atlantic. Lee toys with this title in several ways. It could also refer to the age of the teen protagonist, Gerry. Or to the suspenseful countdown in an activist plot to detonate a bomb. The book begins with a sunset, ends with a sunrise, time is an overarching theme. Lee likes to challenge herself with structure, something we only notice if we look for it in Dead Girls (it’s so artfully done). An unexpected gender-switching dystopian fantasy launches a kind of parallel narrative in The Age. It’s ghastly, but hard to turn away. Yet there’s a deep undercurrent of tenderness in this book, too, of consideration for her characters and for the reader.

But then that’s Nancy Lee. I first met her while taking her workshopping workshop, something required in the beginning days of  the UBC Creative Writing MFA, and her advice was spot on, full of humour, kindly. We, the newest cohort, sat literally wringing our hands as she told us to expect endless edits of our work, to get used to never pleasing (any) everybody, to take in all the conflicting criticisms and to let our heartrates go back to normal before we opened up our manuscripts to make changes. We were told to be truthful when critiquing others. But always to say something nice, first.

2015-03-04
The Local Weekly
Share !
Previous: You are invited to tea at Downton Abbey
Next: Coastal Craft donation to dance troupe