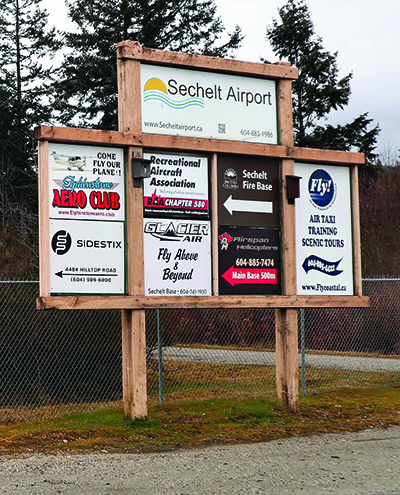 No March 22 “take off” for aerodrome improvements

The District of Sechelt’s announced start date of March 22 for its aerodrome resurfacing and runway extension project came and went with no activity at the site. Sechelt’s Director of Engineering and Public Works Kirn Dhillon told the Local that although contractor Jakes Construction was expected to begin the $3.18 million project that day, it is still working offsite on “the survey layout of the work.”

The District’s website details that the project, which includes a runway extension of 700 feet along with repaving of existing aerodrome apron and taxiway areas, is anticipated to be finished in mid-July. The majority of the work will be completed within the confines of the aerodrome and is expected to have no impact on nearby residences and businesses. The public is advised that there may be increased heavy truck traffic in the area during the construction period.

The aerodrome will remain open during most of the construction. The District’s website states that notifications regarding any closures of facilities related to the project will be publicly posted.

Runway infrastructure was last updated in 1976. Over the past 10 years, Sechelt has made several attempts to undertake improvements. In 2019, it was awarded the first of two BC Air Access Program (BCAAP) grants to undertake the work. That grant of just over $1 million required that the municipality also contribute. Council authorized the District’s portion of $346,865 of project costs come out of its gas tax reserve. Later that year, an engineering review of the conditions at the aerodrome revealed that more extensive work would be required to ensure the runways could be resurfaced to a safe standard.  That prompted another BCAAP application by Sechelt in Dec. 2019 and approval of a second grant for $1.348 million. Gas tax funds were again identified as the source of the required $796,234 District contribution.

Sechelt’s second BCAAP grant award was one of five announced on March 18 by Rob Fleming, BC’s Minister of Transportation and Infrastructure. The total amount of funding announced was $3.4 million. The value of the grant to Sechelt was more than double the award amounts provided to airport projects in Bella Bella, Bella Coola, Boundary Bay and Squamish.

In the BCAAP grant announcement press release, Fleming said, “We know the pandemic has caused financial stress for many industries and significantly impacted our aviation sector throughout BC, including our community airports. But we’re also looking to better days ahead, post-pandemic. That’s why we’re taking action to support communities with important infrastructure upgrades so we can boost jobs, tourism and trade that will give us a head start with BC’s economic recovery.”

Nicholas Simons, MLA for Powell River-Sunshine Coast, was also quoted in the release. “Helping small airports get a head start on pandemic recovery is the right decision. The Sechelt Airport runway upgrades will help tourists, travellers and businesses on the Lower Coast get where they need to go safely and help us all succeed as we recover,” said Simons.