Notes from the Upper Mainland 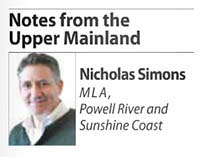 I’m happy to write my column for the Local again; it’s good to see the publication up and running, and I wish it success.
I hope everyone is finding time to enjoy the beauty that summer offers us on the Sunshine Coast, despite our preoccupation with the pandemic and the challenges it brings.
This summer has been very busy with the Legislature in session. Using a hybrid-Parliamentary model, 60 Members of the Legislature (MLAs) are participating from home, and the rest attend in person. I’ve alternated between going to Victoria to sit in the actual Chamber, and participating from home or from the office.
I’ve received a lot of emails and letters about ferries – mostly to do with the Langdale -Horseshoe Bay route – with an occasional one asking about one of the other three routes in this
constituency.
The hastily implemented “Resident Priority” Order from the Province started off working well, when traveling was at 20 per cent of its regular pace. But as soon as a semblance of normality re-emerged, it was clearly not working. When non-essential travel was allowed again, but the Order still gave priority to residents going to their destination, everyone was being considered a “resident” by BC Ferries.
BC Ferries struggled with staging and loading vehicles; sailings were getting delayed significantly, travelers were perhaps not always telling the truth, tempers were flaring, and people watched angrily as late arrivals loaded before them as they contemplated another two hours in a hot parking lot. Visitors and tourists were not getting the best introduction to the Coast and BC Ferry workers were reporting having the worst days on the job.
Since it was clear that “Resident Priority” was not working, and that it wouldn’t be fixed in the short term, I recommended that it be replaced by providing “Medical Priority” loading for those with a Medical Travel Assistance Plan (TAP) form, something residents receive from their doctor when they need a medical appointment off the Sunshine Coast. While the recent change to the “Medical Assured Loading” program was welcomed, I am still pushing for either free reservations or priority loading for TAP users.
I was recently elected Chair of the Special Committee to Review the Police Act. The debate on the role of law enforcement can be emotionally charged for many reasons, but the all-party Committee will focus on the importance of promoting and maintaining a healthy relationship between police and communities, and will likely to find ways to improve the Police Act.
Both of my offices are open by appointment, with Kim Tournat and Rob Hill working alongside me throughout the summer. I wish everyone a good August and look forward to seeing you soon.