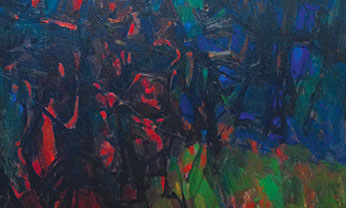 Posted by: The Local Weekly December 14, 2016 in Arts & Entertainment Leave a comment 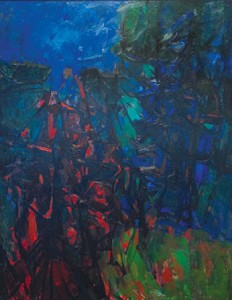 Don Jarvis’ “Night Forest”, 1962, oil on masonite has been donated to the District of Sechelt. Photo submitted

“The District of Sechelt is pleased to receive the donation of this painting by Don Jarvis,” said Siobhan Smith, the Arts, Culture and Communications Coordinator for Sechelt, “’Night Forrest’ is an excellent example of the powerful and abstracted depictions of the coastal rainforest that Jarvis was known for, and we are honored to add this painting to our collection.”

“Night Forest” is the second work by Jarvis in the public art collection, his painting “Inscape – Night Forest”, 1996 was purchased by the District of Sechelt in 2009.

Born in Vancouver, Donald (Don) Jarvis was an artist and teacher who made a significant impact on the West Coast arts community. After studying under artists B.C. Binning, Jack Shadbolt, and Hans Hofmann, Jarvis had his first solo exhibition at the Vancouver Art Gallery in 1950; that same year, the National Gallery of Canada acquired two of his paintings. Jarvis taught painting and drawing at Emily Carr University of Art + Design from 1950 to 1986. Jarvis’ exhibition history is extensive both nationally and internationally and he was awarded many distinguished honours during his career, including a Canada Council Senior Arts Fellowship in 1961, and named full member of the Royal Canadian Academy of Arts in 1967.