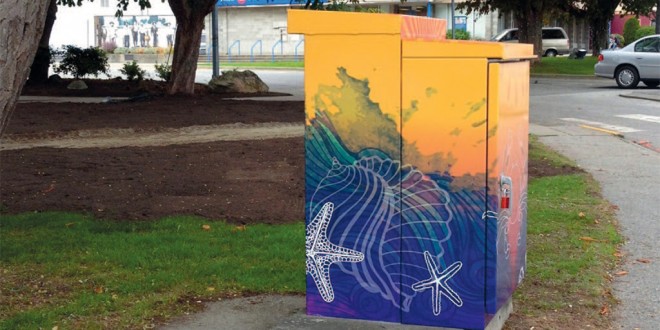 Three new artworks have arrived in Sechelt in the form of colourful vinyl wraps. Created to increase the attractiveness of the streetscape, these artistic wraps were installed on the exterior surface of various pieces of urban infrastructure.

The first is a vibrant marine-themed artwork on the large metal traffic signal box at Acacia Park (5499 Wharf Ave.). Sechelt-based artist and graphic designer LissaNunweiler created the original design called Undercurrent. Her lively artwork was then printed onto sheets of vinyl and wrapped onto the metal utility box in the park.

Nunweiler’s idea for the design was to create a colorful collision of waves with shells, starfish, oysters and an octopus. As she stated “my design attempts to express the bountiful life and energy of the ocean under the sun.”

In addition to Nunweiler’s design, two more art wraps were installed at the Sechelt Skateboard Park (5904 Cowrie St.). Food Poisoning by Chris Mewhort and Burden by Ben Tour were added to the garbage can and water fountain at the Park.

Both the garbage can and fountain had been targets for excessive tagging and vandalism. These art wraps not only cover up the previous damage, but they are also coated in a sealant to make any future cleanup quick and easy.

“We’ve received numerous compliments and requests for more,” said Siobhan Smith, Arts Coordinator for the District of Sechelt. “These recent vinyl art wraps were inspired by the success and popularity of our decorated Hydro utility boxes that were handpainted by artist Jan Poynter in 2008 and 2009. These artists have taken rather dull utilitarian objects and transformed them into vibrant public art for everyone to enjoy.”

The District of Sechelt would like to thank the Ministry of Transportation andInfrastructure and Vital Signs & Graphics for making this project possible.

Previous: Physician Against Assisted Suicide – Cartoon- October 23, 2014
Next: Something for everyone on the crawl