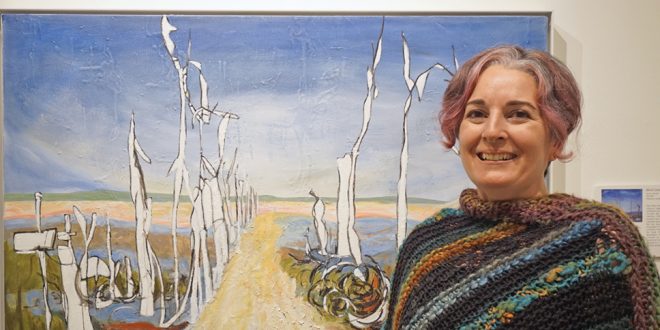 Posted by: The Local Weekly February 19, 2020 in Arts & Entertainment Leave a comment

Painter Marlene Lowden is exhibiting her Blind Contour Homage Series at the Gibsons Public Art Gallery until March 8. The Langdale-based artist grew up on the Sunshine Coast and traces her lineage back to the Armours family of Armours Beach fame. Lowden spent many hours as a teen painting with her father watching the Bob Ross television show, The Joy of Painting. “Dad and I would videotape his show because it was too fast for us and we’d stop and start,” recalls Lowden. “That feeling of being able to turn blobs of colour into a mountain, adding light, giving things depth, it’s just such magic.” 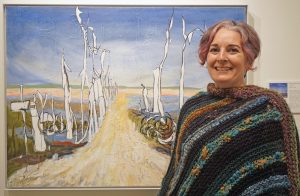 Marlene Lowden poses with her painting Blind Contour Homage: Hamilton, based on Mary Riter Hamilton’s painting The Kemmel Road, Flanders. Lowden will be at a meet the artists session Feb. 22 at the Gibsons Public Art Gallery. Anna Nobile photo

Known for her abstract paintings, Lowden’s new work fuses her interest in drawing, painting and art history. She began researching women artists, finding works of theirs that she admired and created blind contour drawings of those works. In contour drawings, the drawer focuses on the outside of the subject, drawing what they see without removing their pencil or pen from the paper. The “blind” part comes in because this is also done without looking down at the paper while drawing. “You get to really study the work bit by bit as you follow along with your eyes,” says Lowden. “You really slow down and see how the artist created the piece.” During her research, Lowden noticed that women artists were grossly under-represented in books and source materials, so she started a blog where she would write a short bio of the artist and post the original painting along with her blind contour drawing. The response to her blog was overwhelmingly positive, encouraging Lowden to continue. She started focussing on Canadian women artists. “I’m a Canadian female artist,” says Lowden. “And I’m standing on these women’s shoulders and I don’t know who they are.”  She did her first blind contour drawing in 2017 and soon after started doing the drawings on canvass in order to paint her homage, a practice that has a long tradition in the arts where one artist shows respect to another by creating works that allude to the original. She used the contour lines and a strict palette of 11 colours to tie her works together. She’s now painted 32 homage of Canadian women artists, a project with its own website, herartstory.com, highlighting women artists that come from across Canada, who worked in a diversity of mediums, styles and subjects, and who did not get the recognition they deserved during their lifetime. The story of Mary Riter Hamilton is one that stands out for Lowden. “She petitioned the government to be a [First World] war artist but wasn’t allowed because she was female,” recounts Lowden. In 1919, under dangerous and difficult conditions, Hamilton went to Europe anyway and is now celebrated as one of the most important artists of her time. Mary Pratt is another painter who faced sexism during the 1960s and who went on to be named to the Order of Canada in 1996 for her contributions to the visual arts.

Lowden will be showing 16 of the homage series at the Gibsons Public Art Gallery while the other 16 will be at Place des Arts in Coquitlam until March 12. She will be giving a talk on her series at the Gibsons gallery on Feb. 22. “I hope [viewers] discover someone new or re-discover someone,” says Lowden. “I want that awe and inspiration for these incredible women and their lives and their work.”

Blind Contour Homage Series by Marlene Lowden runs at the Gibsons Public Art Gallery until March 8 along with sculptures by Lujca Barker and pastel works by Louise Valentine. All three artists will be present at the Meet the Artists event on Feb. 22 from 2-4pm. More information at gpag.ca