Posted by: The Local Weekly February 28, 2018 in Features, Women in Focus Leave a comment

On March 3, Lori Pratt, School District #46 Board Chair, and I, Darnelda Siegers, District of Sechelt Councillor, are hosting a Women’s Campaign School.  With the information and sessions presented, we are looking to demystify the election process so women who may be interested, will step into leadership roles in politics and potentially run for an elected position this October or in an upcoming election.  We love mentoring other women and, while we will both be running, we welcome the competition. 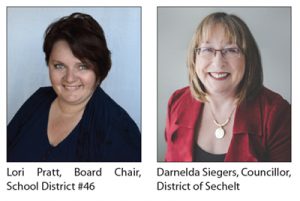 While some of the material being covered is specific to local politics like the Local Government Act and the nomination process, some is generic. There will be sessions on fundraising, making speeches, and social media.  We will also have a panel of locally-elected women sharing about their experience in politics and leadership roles and answering questions attendees will have.  We want to thank the many local women who generously stepped up to help sponsor the event and all the local women presenters.  Everyone involved is supportive of women running.

In the early 1900’s, women fought for the right to vote in elections across Canada.  In 1929, after appealing to the Privy Council of England, white women were finally considered “Persons” and were granted the right to vote or run for any seat in the country, including the Senate.  Voting rights were extended to Asian women in 1948 and finally to Indigenous women in 1960.

After fighting for and obtaining the right to vote and run for office in Canada, the next hurdle to reach is gender parity on our elected boards.  As the population of the Sunshine Coast is 50 per cent female, the aim is that 50 per cent of those elected on each of our local boards this October in the municipal election be women.  Gender parity on our elected boards will ensure they adequately reflect women’s concerns. Currently, on the Sunshine Coast, only two elected bodies, the School District #46 Board (71 per cent) and the Sechelt Indian Band (40 per cent), have hit or come close to gender parity.  The District of Sechelt, at two of seven (28.6 per cent) women elected, and the Sunshine Coast Regional District, with zero of nine women elected, have a way to go.

We #PressforProgress as we aim for gender parity on our elected boards.  We welcome you to join us.

April ‘Ria’ Qureshi-Davidson: Helping others find balance in their lives