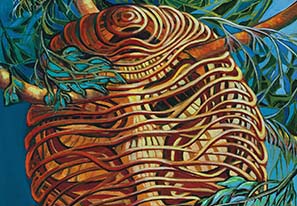 Posted by: The Local Weekly May 4, 2016 in Arts & Entertainment Leave a comment

Marilyn Marshall’s new exhibition, Close to the Bone, opens at the Gibsons Public Art Gallery May 5. Marshall took up painting after a 35 year career as a professor of experimental psychology at Carleton University. Moving to the West Coast in 1996, she “accidentally” ended up in a life drawing class and has been drawing and painting ever since. Though she had an interest in the visual arts (she was instrumental in establishing Carleton’s art department and gallery), she had “expected to do something musical. I’m very fortunate in having found an altogether different life after retirement,” says Marshall.

The title of the exhibition comes from Henry David Thoreau’s Walden: “It is life near the bone where it is sweetest.” The approximately 30 canvasses in Marshall’s show explore and reflect on organisms, human and otherwise, as they age. “When we speak of an issue being close to the bone, we usually mean that it’s getting uncomfortably close to the truth,” says Marshall. “The show points out the beauties of aging and kinship of organisms as they die.” Rather than being depressing, Marshall’s paintings are bold, vibrantly colourful explorations of the cycle of life and death. Inspired by nature, Marshall’s paintings often depict wonderfully weird and strange specimens from her garden found by her partner, Vera. “She’s a mad gardener,” says Marshall affectionately. “We share a love of the grotesque.” 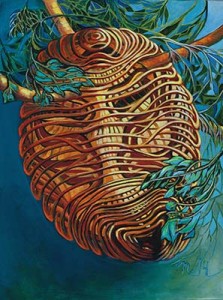 Marshall’s tremendous abilities as a painter are even more remarkable considering how late she took up her brush and that, for the last ten years, she has been living with retinitis pigmentosa, a degenerative eye disease that causes severe vision impairment. She is legally blind and losing her colour vision, forcing her to read her paint tubes so she knows what colour she is using. She agrees that’s a strange thing for a painter to have to do, but says that only focuses her attention on values on the grey scale. “I paint what I can see,” she says simply, taking her condition in stride. “I’ll paint until I can’t anymore and enjoy it while I can.”

A book, also titled Close to the Bone, is being released in connection with the exhibition, and is a retrospective of Marshall’s body of work from the last five years. “My paintings are very joyful even when they’re about topics close to the bone,” says Marshall. “It’s a very autobiographical show in many ways.”

Close to the Bone, an exhibition by Marilyn Marshall, runs at the Gibsons Public Art Gallery May 5-29 with Lawrence and Kathryn Kristmanson in the Eve Smart Gallery. Opening reception Saturday, May 7, 2-4pm. More information at gpag.ca