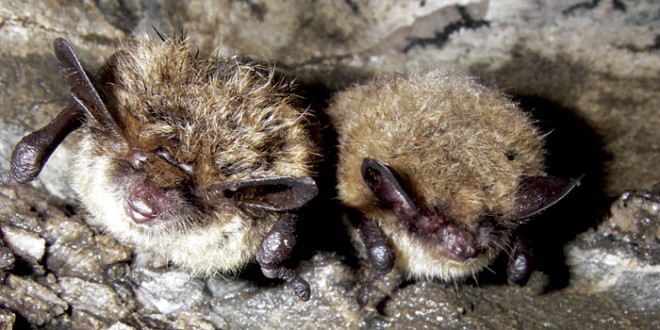 White Nose Syndrome is a fungal disease that kills bats during their winter hibernation period. In order to improve the understanding of bat biology in B.C. and potentially increase their survival rate from the disease, provincial wildlife officials are urging the public to report any bats observed flying during daylight hours this winter, or sites where they are known or thought to hibernate. 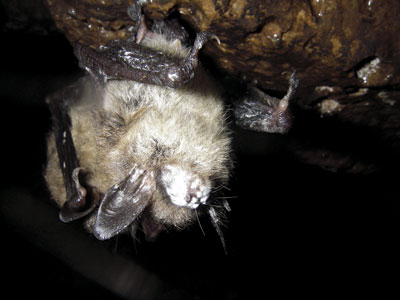 Healthy Little Brown bats (top) before White Nose Syndrome arrived in their colony, and after they were infected by the fungus. Wildlife officials are asking the public to help them identify local bat habitat and behaviour patterns to better understand how to keep the disease from impacting local populations. Photos courtesy New Brunswick Museum

Bats provide tremendous benefits because they are such effective consumers of pest insects, and their loss could lead to significant ecological and economic impacts.

White Nose Syndrome is named for the fuzzy white fungal growth on the nose, ears and wings of hibernating bats. First discovered in New York State in 2007, the disease has killed millions of bats in 22 states and five Canadian provinces.

The fungus is thought to have been introduced to North America and is primarily spread by bat-to-bat contact, although human spread by contaminated clothing and gear cannot be ruled out. It is currently not known to exist in bat colonies west of the Rockies.

Scientists in B.C. are working to understand what bats need, how to protect them from White Nose Syndrome and how to help populations survive should the disease arrive. One of the first steps is to better understand bat behaviour and habitat use in the winter.

British Columbians are urged to contact provincial government biologists at 250-387-9500 if they see bats in the winter. Information of particular importance is the location of winter bat roosting sites, unusual behaviour such as flying during the day, and observation of dead or dying bats.

For more information on how to help protect British Columbia’s bats, consult the “Current Issues” section of the B.C. Wildlife Health webpage: www.env.gov.bc.ca/wld/wldhealth/

For more information on reporting invasive species in your area, visit the Invasive Species Council of B.C. website: www.bcinvasives.ca