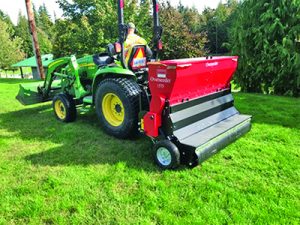 Sunshine Coast RCMP are investigating a report that a green 2010 John Deere tractor was stolen from the Sechelt Public Works yard on Allen Road in Sechelt.

The tractor was last seen on Monday, March 22,
at 3:15pm and was bearing BC license plate X49097. The tractor in the photo is the same one that was stolen but did not have the red overseeder on the back at the time of the theft.

If you have any information about this theft, please call Sunshine Coast RCMP at 604-885-2266.

Early on March 24, a Coast resident reported hearing a thumping noise, but when he went to investigate the front door, he found it secure, so he went back to bed. Later that same day, the resident realized someone had attempted a break and enter to the residence in the 800 block of Park Road, Gibsons, after discovering a basement sliding door forced open and a lockbox damaged by some kind of pry tool. Fortunately, it appears the suspect was scared off before they actually entered the premises. The only missing item noted by the resident is a mail key.

• Between March 23-25, a suspect or suspects have stolen a number of construction signs from road work zones on Gibsons Way and Crucil Road, Gibsons. The stolen signs, which are all orange and have a red DPF sticker on the back, say Flagger, Construction, Single Lane Traffic, and Prepare to Stop. Anyone with any information about this theft is asked to contact RCMP, reference police file number 2021-1987.

• On March 27, a theft was reported at a business in the 6000 block of Sechelt Inlet Road, Sechelt. The owner believed the theft occurred sometime in the week previous. The suspect gained access to the business property and stole a kicker-style outboard motor and two Bravo Mercury Cruiser leg-style motors. Anyone with any information about this theft is asked to contact RCMP, reference police file number 2021-1924.