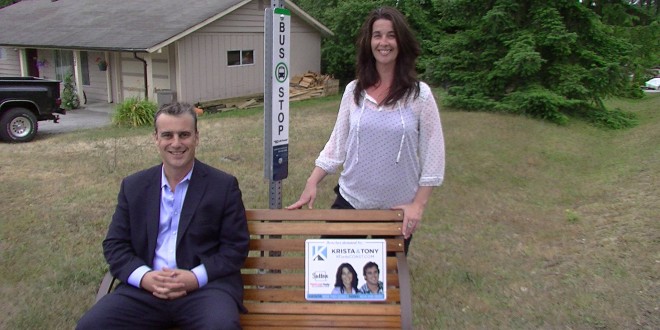 Posted by: Admin July 9, 2014 in Local Community Leave a comment

If you want to get around using public transit, but don’t like standing while you wait, there’s some relief on the way. 18 benches are being assembled and installed in some Sunshine Coast neighbourhoods — maybe one has already arrived at your usual bus stop. It’s happening thanks to some outof- the-box thinking from two Gibsons realtors, Tony Browton and Krista Dempster, who thought it would be good a way of giving back to a community they care about.

“When we’ve been out on realty tours we saw people sitting on the ground, and we realized there was a need for something that maybe we could fill,” Browton said.

While local people donate unused patio chairs to bus stops, many get weathered and broken before long.

“We wanted to give something to the community that would last,” Browton said regarding their donation.

Their gesture has been getting some attention too with local and off-coast radio stations covering the movement, people calling them, and social media messages congratulating the team on their idea.

So was there any red tape from the transit authorities over their installing the benches?

Actually, no, Browten explained. Because the transit board had a vote whether or not to pick up all the lawn chairs people donate and decided against picking them up for budget reasons – as an official stop can cost $7000 plus.

“They (transit) didn’t want people having to sit on the ground so they left them,” he notes and since people are allowed to donate chairs, they decided to donate the benches so there would be some continuity and something that would last.

Generosity toward community is not unusual for the Browton-Dempster team. Tony coaches soccer and basketball, and is a volunteer firefighter with Gibsons Fire Department, while Dempster works with a group called Powerhouse, whose members work on projects to support empowering women.