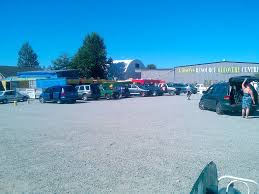 The land that houses the Gibsons Recycling Depot has been sold, as owners Buddy Boyd and Barb Hetherington move towards a new role.

For the time-being, there will be no change in the depot’s operation as it will continue operate with a new landlord.  The sale is scheduled to close Nov. 24 and is going to a local buyer who is happy to maintain the status quo. Boyd said he will honour his recycling contract with the SCRD, which runs through until November 30, 2018.

“I turned down offshore money that would have bought this whole thing and shut it down,” Boyd told the Local.

The two-acre property on Venture Way in Gibsons had been listed at $1.1 million.

Boyd said the recycling services he provides are “grossly underfunded” and that he and his partner have been subsidizing it.

That could have changed when the tender for the Gibsons green dump came up a few months ago, Boyd said, but the Town of Gibsons and the SCRD decided to continue operating it themselves, bypassing the benefits of “one stop drop”.

“Barb and I are environmentalists…We are going to move into activism.”

Knowledge of a pending  sale prompted a sustainability consultant, Erich Schwartz, to lead an effort to raise money to buy the depot and operate it as a community asset. He has been talking to various community groups and local governments, and now is inviting community members to an information session about the project on Wed. Nov. 23 from 6 to 8 pm at Persephone Brewing.

Boyd said such a development is still possible, though it would be up to the new landlord.

Schwartz said recycling would be at the heart of the operation “because it keeps a steady stream of people coming through the door. Margins are not great on recycling, but there is a margin on refurbishing and repairing.”

His vision is to create an artisan village that would include activities such as carpentry, bicycle repair, and electronics repair. He points to Wayne Harjula of Mellon Glass, who is already making and selling embossed mugs using glass bottles brought in for recycling.

“We would create a synergy – artisans, hackers, tinkers all in one area sharing ideas and equipment,” said Schwartz. He would like to work with a university to create a mini-lab to experiment with materials, and has been talking to the Maker community about bringing in 3D printers which would use recycled plastic to create new objects.

An earlier version of this story said the recycling contract ran through 2017. In fact, as the story now correctly states, the contract runs to November 30, 2018.