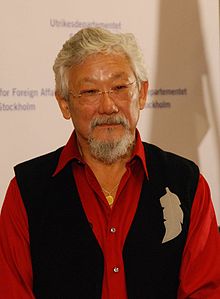 Rediscovering our place in nature

Posted by: Admin January 13, 2021 in Opinion Leave a comment

The following is adapted from “The Sacred Balance: Rediscovering Our Place in Nature,” a book I wrote with Amanda McConnell in 1997 and updated in 2007. It seems as relevant today as when we wrote it. I hope you enjoy it and that the year ahead brings new ways of seeing and thinking about the world.
For thousands of years, small communities of people ensured relative tranquillity while providing for the social needs of their members. The explosive rate at which our species has been converted to an urban creature has been accompanied by a deterioration of the social fabric that held people together. The 20th century witnessed an unprecedented shift from predominantly rural community living to big city living.
In cities, distanced from nature and the primary means of production like agriculture, fishing, logging and even manufacturing, we accept that it is the economy that provides our needs. Technology has enabled us to travel rapidly and communicate over vast distances, while television, computers and portable entertainment devices sever the shared activities with neighbours and communities.
Consumerism has taken the place of citizenship as the chief way we contribute to the health of our society. Economic rather than social goals drive government and corporate policies. The resulting high levels of unemployment produce stress, illness, and family and community breakdown. Stable communities and neighbourhoods are a prerequisite for happiness, for productive and rewarding lives, for a crucial sense of security and belonging. They are a bottom line for the health and happiness of human beings. It is not economics that creates community but love, compassion and co-operation.
Those qualities exist in individuals and are expressed between people. And they cannot be fully expressed in isolation, without context, cut off from their place in time and space, their source in the natural world.
The stability of family – whatever its form – within a community provides an environment within which a child develops curiosity, responsibility and inventiveness. Ecological degradation – deforestation, topsoil loss, pollution, climate change and so on – destabilizes society by eroding the underpinnings of sustainability. This consequence was graphically illustrated in 1992 when all commercial fishing of northern cod in the Canadian province of Newfoundland was suspended. Overnight, 40,000 jobs were lost as the foundation of that society for five centuries vanished.
All across Canada, towns boomed as forests were clearcut around them, only to crash when the trees were gone. The coast of British Columbia is dotted with villages that once supported fishing fleets and canneries but were abandoned as salmon populations declined. Ecological health is essential for full community health.
War, terrorism, discrimination, injustice and poverty mitigate against that social stability that is so important. Chronically high levels of unemployment, such as those found in the Atlantic provinces in Canada, on American Indian reservations or in Australian Aboriginal communities today, result in despair, alcoholism, illness, even death. The need for meaningful employment is critical to the well-being not only of family but of community.
Besides the economic benefits to government and individuals, there are compelling reasons to seek full employment as a social goal.
An economy was once created to serve people and their communities. Today economic rationalists contend that people must sacrifice and give up social services for the economy. As we reflect on our fundamental needs as social animals, it is clear that families and communities assured of biodiversity, full employment, justice and security constitute the real non-negotiable starting point in the delineation of a sustainable future.
From family to neighbourhood, from neighbourhood to nation, out into the commonwealth of our species – the connection seems to attenuate as it becomes more inclusive. But as we explore the continuum of relationships in any human life, we start to see that the circle of inclusion extends further still; the “continent” of which we are each a part encompasses the Earth.
The “law of love” is as fundamental, and as universal, as any other physical law. It is written everywhere we look, and it maps our intimate connection with the rest of the living world.
David Suzuki