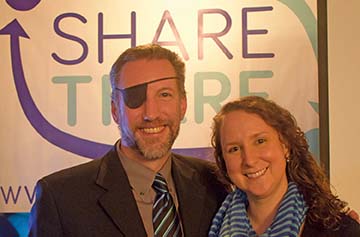 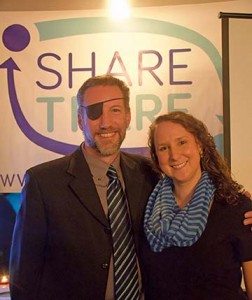 Sean and Michelle Morton, here at the Persephone brewery launch of their share-there.com website, say about 10 people a day are signing up to their ride-sharing online community. Rik Jespersen photo

Judging by its sold-out launch party and by the rate at which people are signing up, the Sunshine Coast’s innovative new ride-sharing program appears to be picking up speed.

Share-There.com, developed by husband-and-wife team Sean and Michelle Morton, is a unique blend of online tools designed to both help people get around the Coast easily, and help build community.

“It’s modeled on a few things that have never combined like this,” Sean Morton said at the packed Jan. 22 launch at Persephone Brewery. “It’s a social networking platform with a ride-sharing map tool. It makes it easy for people to communicate about the essentials of ride-sharing.”

Not everybody on the Coast has a car available when they need it, yet many cars are driven mostly empty, Sean noted.

“Up and down the Sunshine Coast, just from Gibsons to Sechelt, there are about 8,000 or 9,000 cars on the road a day. And about 85 per cent of them have only one person in them.”

There’s no charge to use the simple—and mobile-friendly—Share-There website, where you can offer a ride, ask for a ride, look for a ride, create a ride-sharing network or group, or seek a group to join.

The concept has taken the Mortons about two and a half years to develop, so they’re also executing a business plan with the intention of getting a return on that investment.

“The ride-sharing is totally free, because we want to make it really accessible for people. But we’re also doing event ticketing,” said Michelle. “We take a small ticket-processing fee, that’s how we make some revenue.”

Sean added that they’re also selling advertising on the site, with local IGAs already signed on.

“That’s why you see the little IGA icons on the map. So if you want to be a landmark, you can get on our map like that. That’s another part of our revenue stream,” he said.

About 130 people have signed up on the site already, and that’s going up by about 10 people per day. The Mortons have set themselves an ideal target of a few thousand participants, and envision expanding to Powell River and beyond.  Rik Jespersen