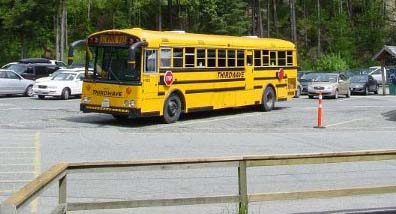 School District No. 46 (Sunshine Coast) is pleased to announce that Thirdwave Bus Services is the successful proponent of the recent student transportation contract tender. The school district is required to publicly tender the supply of goods and services valued in excess of $75,000 and proposals received in this tender were evaluated over the summer. Student safety was the first consideration and all proponents were evaluated with this in mind. The evaluation of the proponents further considered the age and condition of buses, the maintenance program, quality of service, price and other factors.

The final rankings were as follows: First Student, Thirdwave, Sechelt School Bus. School District No. 46’s stated goal was to enter into a long-term contract for consistency for staff, students and their families. The District negotiated with First Student as lead proponent initially, but was unable to reach an agreement due to the reluctance of the proponent to sign a long-term contract without the ability to terminate for convenience. The process continued with the next highest ranked company and an agreement was recently signed with Thirdwave Bus Services.

“We are excited to welcome Thirdwave Bus Services as the bus company for SD46 this September,” stated Secretary-Treasurer Nicholas Weswick. “We thank Sechelt School Bus Services and Pender Harbour Transportation for their many years of valuable service to our students,” he added. Mr. Weswick also commented that bus routes would largely remain unchanged for students. Thirdwave has indicated that a fleet of all new buses will be on the coast within a few months. In the interim, the bus company will use an existing fleet, with all buses fully meeting safety standards.

Thirdwave Bus Services is a BC company with an excellent reputation and holds contracts with several BC school districts, including the Francophone Education Authority, Victoria School District and several private schools. The bus company will ensure a seamless transition to the Sunshine Coast School District, with bus drivers who had worked for Sechelt School Bus Services or Pender Harbour Transportation given the opportunity for employment. Students who were previously registered with Sechelt School Bus Services or Pender Harbour Transportation will automatically be registered with Thirdwave Bus Services. New students to the school district may register for busing at: www.secheltschoolbus.ca/form/