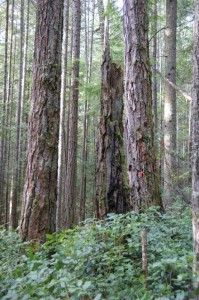 Two logging-related issues came before the Sunshine Coast Regional District’s board meeting on May 26: proposed harvesting of a cutblock adjacent to Mt. Elphinstone Provincial Park, and a request that the SCRD purchase a private property to prevent further logging in the Chapman Creek watershed.

Roberts Creek Director Mark Lebbell made a motion to ask BC Timber Sales not to sell cutblock A87125, which lies between two pieces of Mt. Elphinstone Provincial Park.   The proposed cut, said Lebbell,  “would have significant impact on the ecological and recreational values that are held to be important in our community.”

Mt. Elphinstone Provincial Park consists of 139 hectares of land in three separate parcels above Roberts Creek.  Members of the community have been campaigning to expand the park, but the province currently has no plans to do so.  The area falls within the Roberts Creek Official Community Plan, and the SCRD wrote to BC Timber Sales in November 2014 expressing the importance of preserving it.

The Sierra Club BC has also called on the Provincial Government and local authorities not to auction this cut block.

Lebbell noted that the matter was urgent, as the cutblock was scheduled to go to auction on June 3.  “I have concerns about what will happen in the forest above the community in terms of a community response to the piece of land that many hold quite dear,” he said.

The board unanimously supported Lebbell’s motion.

Ross Muirhead from Elphinstone Logging Focus (ELF) also appeared as a delegation at the meeting, requesting that the SCRD purchase a 400-acre parcel of private land in the Chapman Creek Watershed through a public referendum process.

“As you know, ELF maintained a 24/7 roadblock for almost three months this winter, preventing  AJB/Surespan from further logging of the Chapman Creek drinking Watershed in the hopes that it would buy time for the SCRD to inform AJB of an intent to purchase their private lands,” said Muirhead.

According to Muirhead the property owner has been waiting since 2014 for the SCRD to make an offer.  “The community at large, ELF and Surespan remain perplexed over the lack of initiative on this file by our current SCRD Board,” said Muirhead.

“Taking control or purchase of the private lands is what the taxpayers clearly want to see happen.”

Muirhead urged the board to act immediately, since new logging would not occur for three to four weeks.  “There’s an opportunity still before the board to contact Surespan.”

Muirhead also warned that the watershed lands should be secured from unauthorized vehicle access, which raises the risk of fire.  “A raging fire is a watershed manager’s worse scenario,” he said.

Board Chair Garry Norh told Muirhead that the board considers the watershed extremely important.  “We’re working with staff to try and get a resolution that’s positive,” said Nohr.

2016-06-01
The Local Weekly
Share !
Previous: Bears! Who you gonna call?
Next: Gravel mine back on SCRD agenda