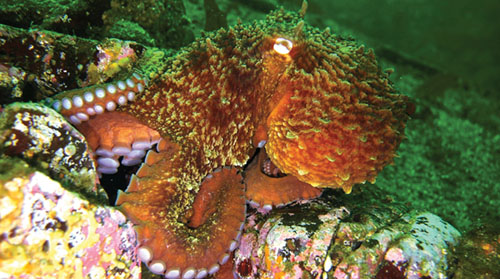 Scuba diving on the Sunshine Coast: A best kept secret

The Sunshine Coast’s reputation as a tourist destination is growing with outdoor adventure activities like hiking, biking and kayaking leading the way. But what about scuba diving? In 2018, readers of Scuba Diving Magazine rated BC as having the best wall diving, as mountain and cliff walls continue below the waterline, attracting all kinds of marine life in clear emerald waters. Abundant and diverse sea life, wreck-, shore-, and boat-diving, are all features of scuba diving on the Sunshine Coast, but are we still a best-kept secret when it comes to underwater adventures? Loretta Corbeil of Sunshine Kayaking thinks so. “The Howe Sound area is an untapped market,” says Corbeil. “There are 45 different dive sites totally unknown.” Sunshine Kayaking has been operating for 28 years, but only took on scuba charters after the sinking of the HMSC Annapolis in Halkett Bay by the Artificial Reef Society in 2015. “We saw a whole new tourism market that needed to be developed,” says Corbeil, who outfitted her 34 foot EagleCraft Cruiser for diving charters and hired a dive master to service that market.

To scuba dive you need gear, if you haven’t already got you own, and air tanks filled, or re-filled. For now, Sunshine Kayaking is focussing on charters, so they work with Seadog Divers Den in Sechelt for anyone needing equipment and air fills. James and Christy McKinney have been operating Seadog for the last three years. They took over the gear rental and tank fill operations from a previous business and are just now ramping up a retail presence. After 30 years of working as a commercial diver, James was ready for a career change. He sees running the scuba shop as part of carrying on a strong scuba tradition on the Coast. “It’s needed here. We get a lot of tourists who want to check out the water and scuba is the best way to do it,” he says. “And if you can’t scuba dive, you can snorkel.”

One of the best shore dives on the Lower Coast is in Tuwanek where Jonathan Dewsbury operates The Scuba Shack, a short-term rental located a short distance from Tuwanek Point’s beach access. A dive master and instructor, Dewsbury focuses on small groups, offering guided shore dives and arranging boat dives for more experienced divers. He also certifies between 30 and 50 new divers a year, many of whom are from the Coast, though sometimes, people will come from the Lower Mainland, rent the Shack and do their scuba certification dives with him over a weekend. “It’s one of the best dives in BC,” says Dewsbury of Tuwanek. “It offers great visibility and an abundance of sea life, including octopus and wolf eels.”

That has to be the biggest appeal of scuba diving: seeing weird and wonderful creatures doing their thing in their own habitat. “It’s the land that Dr. Seuss built,” says Gary Lambeth of Salish Sea Dive in Powell River. “It’s completely and utterly foreign and beautiful within feet of where you are most familiar. It can be life changing.” Lambeth would know. He had been working in Vancouver as an animator with Disney and DreamWorks and “happily gave that up. I love scuba diving. It beats working for a living,” he jokes. “It’s a lot of time and effort, but it doesn’t feel hard because it’s a labour of love.” Salish Sea Dive is a full-service scuba shop that offers everything in one place: rentals, service, retail, guidance and instruction. Lambeth believes Powell River could become a scuba diving destination with some targeted advertising, having already shown tourists from as far away as Russia, Germany, India and China the local dive spots. With a very active scuba club that gathers once a month, Lambeth is kept busy servicing the local community and certifying 40 to 50 students a year, including entire families with kids as young as 10. “I wanted to bring back the more family oriented flavour to diving,” says Lambeth. “I’m trying to make it more accessible to everybody.”

Though most people dive in the summer, winter is actually a better time to dive in order to avoid algae blooms. The Sunshine Coast could be a year-round world-class scuba diving destination and a boon to local businesses during the traditional “slow time.” To that end, Sunshine Coast Tourism plans to work with local stakeholders and the Dive Industry Association of BC to submit an application to the Destination BC Cooperative Marketing Program for matched marketing funds in 2019. “I remember going to Tofino when it was nothing,” says Lambeth. “Now it’s a huge destination. There’s no reason why the Coast couldn’t be something like that.”