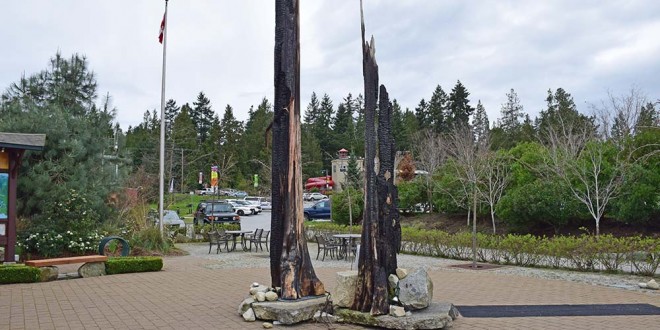 Sculpture to be dedicated

The District of Sechelt is pleased to invite the public to attend the dedication of “Regeneration”, a sculpture in honour of the late John Phare and the staff and crew of BC Wildfire Service. The ceremony will be held Saturday, July 16, 3:30pm in Spirit Square, next to the Seaside Centre/Visitor Centre.

Inspired by the tragic events of the ‘Old Sechelt Mine’ wildfire of 2015, “Regeneration” is a sculpture that addresses human impact on our environment, and nature’s ability to recover and regenerate after disaster.

Roberts Creek-based artist Gordon Halloran worked in partnership with the Sunshine Coast Community Forest and numerous volunteers to create this sculpture. The artwork features two cedar trees that were burned in the 2015 wildfire. Inside the burned trees a live cedar seedling will grow for a period of two years, at which time it will be transplanted into Hidden Grove at the Sunshine Coast Community Forest.

“Regeneration” is the most recent addition to the District of Sechelt’s Public Art Collection.