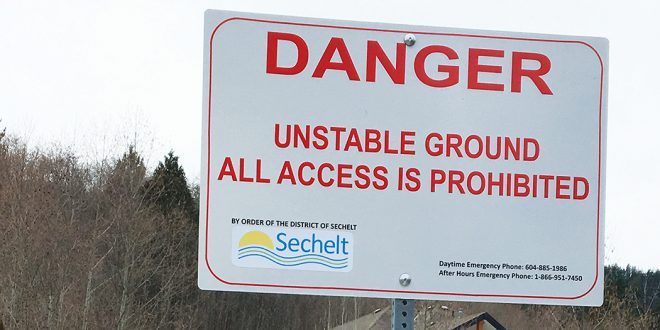 Seawatch emergency first of its kind in Canada

For the past month, the District of Sechelt has filed weekly paperwork to maintain a state of “Local Emergency” related to the threat of sinkholes at the Seawatch subdivision.  It plans to keep this up until it finds another option to address issues related to public safety at the site.

On March 12, Mayor Darnelda Siegers met with officials from Emergency Management BC and the Ministry of Municipal Affairs and Housing.  The meeting in Vancouver was arranged by the district to look for answers on what it can do.

“It is these groups’ roles to advise local government.  My questions to them were, what options for dealing with this situation are available to the district; what can we do, other than keep the fencing up around the area,” said Siegers.

No new approaches were identified at the meeting. Provincial representatives did say they would continue to investigate options for the district to pursue. No time frames for responses or dates for follow up meetings were committed to by the province.

“The difficulty is that a situation of the scope of Seawatch has not happened anywhere in Canada before,” said Siegers.

The district ordered area residents to evacuate their homes on Feb. 15, due to safety risks posed by sinkholes and ground instability.  Other than two days of emergency shelter assistance from the province, the residents have not been offered government compensation. Individuals and groups in the community have assisted them on a number of fronts.  A range of private fundraising activities to benefit the evacuees continue to be undertaken.

The province says its Disaster Financial Assistance program does not apply to the Seawatch situation. It does not meet the program’s classification of a “natural disaster”.

Mayor Siegers said the district has no plans to meet with the evacuated residents until there is news to share.  On March 14, Siegers’ office sent an email to the impacted property owners to update them. It states that “property owners have to evaluate their own situation and take their own actions against parties they believe have caused them harm. The District cannot do that for them.”

The Local State of Emergency order gives the district powers to take actions considered necessary to address the situation. The district is monitoring the closed subdivision using drones and motion activated cameras. Regular checks outside the closed area’s perimeter are being conducted by district staff and the RCMP.

As no one can enter the site, district staff are no longer monitoring the piezometers that were installed to track groundwater levels within the subdivision. Underground water movement has been identified as a potential cause of the sinkholes.  The district is continuing discussions with engineering professionals on options to re-establish safe access to the site.