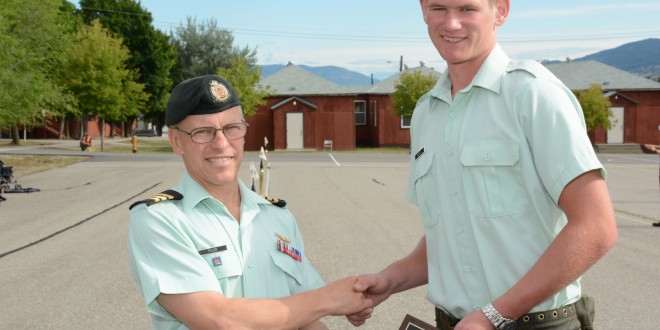 Sechelt Army Cadet is best in platoon in Vernon 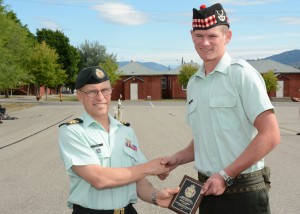 Vernon, B.C. – Cadet Nathaniel Marshall of Sechelt B.C. was recognized as the best cadet in his platoon during the three-week Basic Leadership Course at Vernon Army Cadet Summer Training Centre.

Cadet Marshall attended the three-week Basic Leadership Course which prepares the cadets to fill the roles of junior leaders at their home corps. They learn problem solving, time management, team building, and effective communication skills to enable them to command other cadets at the 10-member squad level. They also learn rifle drill and compete in a summer biathlon. Leadership skills are a major part of a three-day field training exercise in the hills of the Okanagan Valley.

During the summer, more than 1200 Army Cadets from western Canada will have spent up to six weeks in the Okanagan Valley training centre, expanding the training they receive at their home corps, developing new skills and forming friendships.

The Cadet Program is a national program for young Canadians aged 12 to 18 who are interested in participating in a variety of fun, challenging and rewarding activities while learning about the sea, army and air activities of the Canadian Armed Forces. Cadets make valuable contributions to Canadian society on a daily basis in terms of environmental, citizenship and community activities. Cadets also learn valuable life and work skills such as teamwork, leadership and citizenship.

CUTLINE
Cadet Nathaniel Marshall of Sechelt, B.C. is presented with the plaque recognizing his achievement as the best cadet in his platoon during the three-week Basic Leadership Course at Vernon Army Cadet Summer Training Centre by the reviewing officer, Lieutenant Colonel Kevin Tyler, Commanding Officer of the Rocky Mountain Rangers.