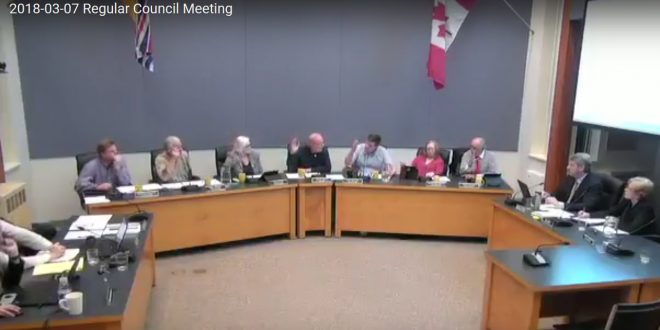 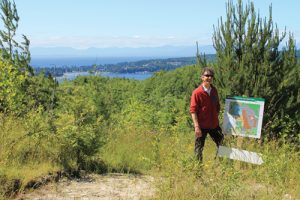 SSC official Todd McGowan showed off the company’s plan for a 1,360-unit residential development on Sechelt Inlet during a media tour in 2017. Sechelt council has now rejected the plan because it does not fit with the district’s plan for urban density. Donna McMahon photo

On March 7 Sechelt Council turned down a motion to give first reading and hold a public hearing for a major residential and commercial development proposed by Sechelt Sustainable Community Properties Ltd. (SSC). The vote was six to one, with only Councillor Darnelda Siegers in favour.

Todd McGowan, education development director for SSC, appeared as a delegation to urge council to give first reading to the proposed 170-hecatre (420-acre) development on Sechelt Inlet, about five kilometres from downtown. McGowan described the former industrial site as “tailor made for development” and said that SSC would create 750 full time jobs as well as other spinoff economic benefits at full buildout.

But a report by Sechelt’s director of planning, Tracy Corbett, outlined a number of significant issues with the proposal.

The development of 1,360 residential units (including buildings as high as eight storeys), commercial space and a private school, conflicts with the district’s Official Community Plan (OCP), which concentrates density and commercial activity in the downtown core. Corbett said Sechelt already has enough zoned land within its urban containment boundary to accommodate 20 years of growth.

Moreover, since the site is not currently on water or sewer lines, services would have to either be extended from Sechelt or provided privately by the developer. If the development failed or was not fully built out, the district would be left with an expensive infrastructure liability.

“Sometimes you do need to look a gift horse in the mouth,” said Corbett.

Councillor Siegers spoke in favour of first reading. “I think we’ve been hearing from the community for quite a while that they would like a say in this and the only way they’re going to get that is if we give it first reading and take it to public hearing,” said Siegers.

But Councillor Doug Wright disagreed. “I would very much like to see this project go forward to the community for input, however I think in good conscience it would be irresponsible on my part to do that,” said Wright.

“When I look at this overall project, and I look at variations from the OCP, when I look at the height of the buildings, which I’m not in favour of…  Why would we take it to the community if we’re not satisfied that this is good for Sechelt?”

Mayor Bruce Milne stated that he opposed giving first reading to a project that was “not ready” for a public hearing.

Following the vote, Milne stated: “Tonight I think we made the decision we should have made in 2015.”

The SSC property first came to Sechelt council in 2006 as “Silverback” and was zoned in 2008 for a golf course resort and 1,600 residential lots. None of that was built and Silverback went bankrupt. The property was purchased in 2014 by investors that included local residents John Henderson (who was then Sechelt mayor) and Clark Hamilton, who incorporated SSC Properties.