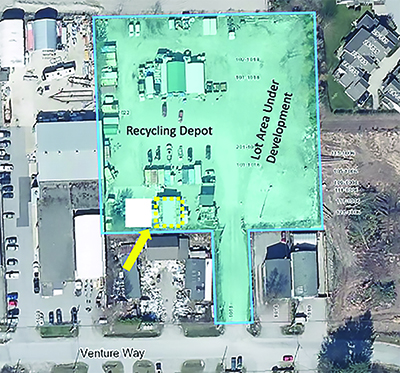 A second 40 by 40 foot tent to house expanded cardboard baling activities is being proposed at Gibsons Recycling Depot. On March 16, both committee and council endorsement of moving that plan to the public consultation phase was granted. In addition, the consultation will also ask for views on extending the Town temporary use permit (TUP) that allows the business to operate on its current Gibsons Way location.

Business owners Tyler and Amanda Nygaard told the committee that the volume of cardboard they are processing had risen significantly over the past year. Tyler Nygaard stated he viewed the increase as a spin-off from more online shopping and home delivery of goods during the COVID-19 pandemic.

The proposed second tent is to be adjacent to the one already on site, which houses the business’ first cardboard baler. It is planned to be the same size and height as the existing tent and would be secured to side wall bases formed by shipping containers. Plans are for the second structure to be open at both ends.

The business holds a three-year TUP to allow temporary structures to be used on the site. That TUP will expire in May 2022. Local governments are permitted to issue TUPs for periods of up to three years, and a TUP can be renewed once, for a second period of up to three years.

In a report to committee, Planner Kirsten Rawkins explained, “The depot’s need for the use of the tents is expected to continue beyond the current one year remaining on the existing TUP, but due to anticipated changes to recycling operations at the regional level, the need for the use is not expected to exceed four years.”

In committee discussion, Mayor Bill Beamish asked if the owners had plans to eventually replace the tents with permanent structures. Beamish noted that the Town does not levy taxes on tents as property improvements. The Nygaards said that they are leasing the existing site but that if an appropriately zoned and sized property were to become available for purchase, constructing a building may fit with their business plan.

Town consultation on the applications will involve letters to neighbours of the property to notify them of the request to add the second tent and to renew the TUP. Gibsons Recycling’s application will be the first in the Town to require notification of neighbours within 100 meters of the property. The notification area for such applications was recently doubled in the Town’s development procedures. The applications have also been referred to the area’s fire department, as well as Town Building and Infrastructure Services departments for comment.