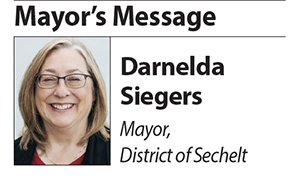 Siegers: An airport grant for Sechelt

Posted by: The Local Weekly August 14, 2019 in Government & Politics Leave a comment

Recently the District of Sechelt was awarded an airport grant of just over $1million to resurface and extend the airport runway.  This grant covers 75 per cent of the cost with the remainder coming from our gas tax revenue. Council also formed an Airport Development Committee to investigate economic development opportunities at the airport.

Currently, both Harbour Air and Sunshine Coast Air provide floatplane service to the Sunshine Coast.  They operate using daytime, VFR or Visual Flight Rules.  That means that they can’t fly at night or in inclement weather below the minimum VFR limits. The current capabilities of the Sunshine Coast regional airport allow for night time operations but the limited runway length negates larger commercial operators from being able to use the airport with aircraft of any commercially-viable capacity or for scheduled operations.

The airport also does not have Instrument Flight Rules (IFR) capability that would allow aircraft to land and take-off in inclement weather. The improvements could open up the airport for use by larger commercial scheduled operators and allow for added IFR or Instrument Flight Rules capability.  That means that at night or when there is inclement weather, airplanes could potentially still take off and land at the strip up on Field Rd. This would be a great benefit in the shorter winter daylight hours, allowing extended operations outside the scope of what floatplanes can provide.

Helicopter Air Ambulance is currently only able to service our hospital in VFR conditions, day or night.  After the improvements are completed, we will have added options of fixed wing aircraft when the helicopters are not available and both fixed wing and helicopter could use the potential IFR capability in inclement weather. Other vital services, like RCMP Lower Mainland Special Service Units, fire-fighting teams, urgent medical supply deliveries, are about being able to get someone or something somewhere in a short period of time at any time of day or night.

The first question those looking to invest in our community ask is “do you have an airport?”   They recognize the value aviation provides by connecting cities and markets. New small and medium-sized companies would be enticed to locate here and be able to remain in our area, creating local jobs while remaining connected to the larger cities and markets.  As companies establish and grow, they are sometimes pressured to relocate away from the Sunshine Coast in order to have access to larger markets and the worldwide transportation network provided by airports.

Finally, we have a lot of residents who provide expertise through consulting globally.  While airports and airline services move cargo, they also contribute to knowledge and service-based businesses.  In today’s knowledge economy, the most precious cargo airplanes move is people.  The ability to move people, who generate and share knowledge, matters even more than the ability to move cargo and would allow our local knowledge network to continue to reside on the Sunshine Coast while they do business in larger cities.