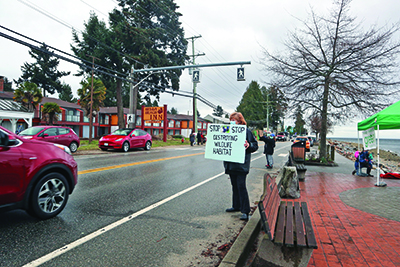 Close to 50 area residents concerned about preserving BC’s old-growth forests gathered in the rain on March 19 in solidarity at the Davis Bay pier for an information demonstration. The event was part of a province-wide “day of action” organized to pressure the BC Government to stop all logging of old-growth immediately. In a posting to Facebook earlier that day, event organizers reported that over 25 BC communities affected by such logging activities were participating. The Davis Bay event was spearheaded by the Gambier Guardians, a group of forest protectors from Gambier Island. Representatives of the local chapter of the provincial Green Party also attended in support. The Guardians are taking action on Gambier Island to educate local residents and to gather scientific evidence to demonstrate that the cutting of a local wood lot is not in the best interest of the island.  Connie Jordison photo