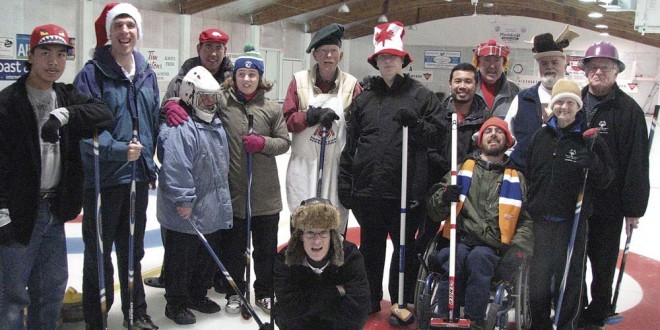 Posted by: The Local Weekly April 1, 2015 in Sports & Leisure Leave a comment

Good day all Special Olympics fans! This month I will focus on Curling and Rhythmic Gymnastics, the final two sports of our fall/winter
season.

Curling takes place at the Gibsons Curling rink every Saturday around noon. Head coach Bill Climie and volunteer coaches Peter Metcalfe, George Proudfoot and Dave Sandness give their time to teaching the art of sweeping, sliding and putting the ‘rock’ in the circle.

On February 28th, the last day of curling for this season, I travelled to Gibsons Curling Rink to get the lowdown. This was also funny hat day so I wore a silly hat to fit
right in.

A few athletes explained why they joined curling. Amber Maher said that it’s fun and she enjoys it. Bruce Stuart told me that he was looking for a sport to replace our ancient one of bowling and he figured it would be a new sport to try. I also spoke with Coco Vito and his friend Charlene and they let me know that Coco wanted to join an interactive team sport. He picked up the skills quite fast and enjoys being with the guys on the rink.

Of course, the highlight of every season was the fun bonspiel that the team attended in Abbotsford where they also celebrated the birthdays of Bill Climie and Michael Brooks at the Old Spaghetti Factory.

On Tuesday, March 24 I went to the Sechelt Rec Centre and peeked in on a Special Olympics rhythmic gymnastics practice.

We are very lucky to have these fresh faces involved in our branch of Special Olympics here on the Coast. Grace has experience in the dance community and the special needs community and brings a combination of encouragement and expertise to the practices. Roxy is an Olympic experienced gymnast.

The athletes who are fortunate enough to be in this class are Abby Jeffery, Linsey Davidson, Amanda Boghean, Theresa Presley, Tracy Schoular, Marina Stevens and Amber Fenton.

I gathered from my visit that there is much more involved than simply twirling a ribbon or rope, or sliding and bouncing a ball. There is technique, soft movements, elegant use of body and accessories.

Once again I would like to make the argument for male inclusion into Special Olympic Rhythmic Gymnastics. It looks like a lot of fun and hey I don’t mind tights. LOL.

We all look forward to seeing the athletes’ first performance under their new coaches. They are definitely getting some top-notch lessons.

That’s all for now folks, see you next month! Track & Field will be starting up as well as soccer, softball, bocce and even golf! The world of Special O never slows down!