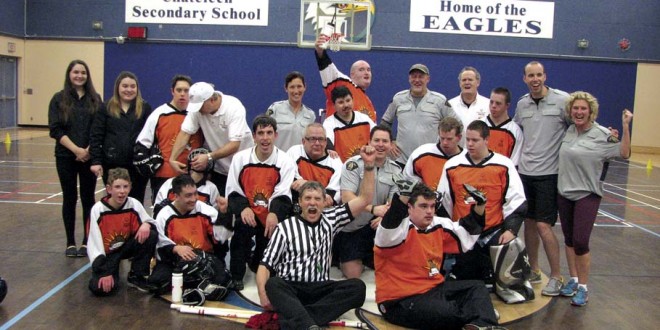 Posted by: The Local Weekly February 4, 2015 in Sports & Leisure Leave a comment 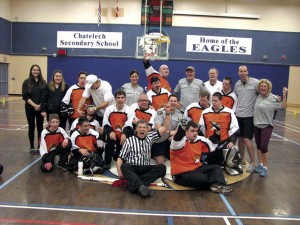 Hello Special Olympic fans! I would like to highlight another popular sport, FLOOR HOCKEY!

“Floor Hockey is adapted from the games of ice hockey and ringette and is a fast-paced game. It is played indoors during the fall and winter months. Teams are composed of six players, including a goalie. Athletes use wooden poles as sticks and large felt discs with an open center as pucks. Emphasis is placed on skill development and team play. Floor hockey takes place at Sechelt Elementary School Gym on Tuesdays from September through February.”

The team is called the Sunshine Coast Bears after the team’s mascot who is a regular part of the practices. This year they are showing off their new uniforms. Thanks go to Genevieve from Source For Sports in Sechelt for the terrific design that is emblazoned on the front.

On Tuesday, January 20th, members from the local RCMP, Kevin Sheperd, Ben Stewart, Wayne Spycka, Nicole Hall and Andrea Ceulemnas took time from their busy lives as Sunshine Coasts finest to join in a fun game with The Bears.

Players and officers were randomly divided into two teams. Both teams were called ‘The Bears’. There were awesome plays from the athletes and officers alike with a lot of fast moves and power plays. People in the stands were hyped.

In the end, it was a tie game but as the ref said, ”The Bears won!” Thanks to Chatelech High School for the use of the gym for this fantastic event.

In the coming weeks there will be a Swim Meet at UBC and a Basketball Tournament in Coquitlam. I’ll tell you about them next time.