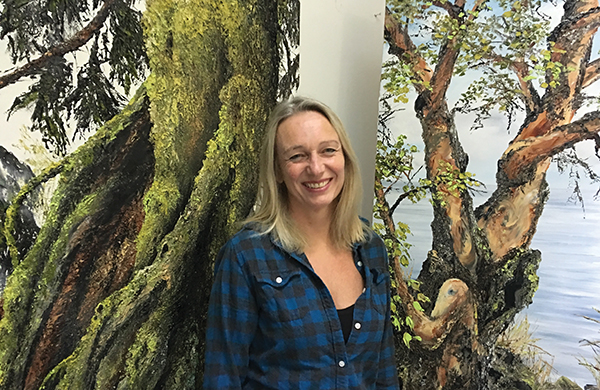 Posted by: Editor October 18, 2016 in Arts & Entertainment Leave a comment

This year’s much anticipated Sunshine Coast Art Crawl features 41 new venues with a total of 130 artist studios and galleries open to the public Oct. 21 to 23. A veteran of the Crawl, internationally renowned painter Marleen Vermeulen will be exhibiting new works with textile artist Ursula Bentz. Vermeulen’s work is instantly recognizable for her familiar locations on large canvasses and thick oil paint applications that give her stunning landscapes a three dimensional quality. “It’s important to me to share my work with this community where I live,” says Vermeulen, who usually receives hundreds of visitors over the Crawl weekend. “It’s overwhelming,” Vermeulen admits of the numbers. “And humbling at the same time, but it’s part of the journey.”

Artist Marleen Vermeulen in her studio. It is one or more than 130 locations that can be
visited on the Sunshine Coast Art Crawl, Oct. 21-23. Nick Vermeulen photo

The journey and process of artistic creativity is important to Vermeulen, and her friend and fellow painter, Marlene Lowden, also a Crawl participant. The two of them embarked on a creative initiative called Open Your Art, inviting participants to Jesus, Spain for an art retreat. “Marlene and I are both very open in how we work and who we are,” says Vermeulen. “Painting or connecting to your creativity is a way in [to the self] and to let go of fears and outcomes. It’s so valuable to share that with others.” They posted the idea of the retreat on Facebook to see what would happen. It sold out a year in advance. Of the 13 who participated, seven of them are now exhibiting at the Crawl under the Open Your Art banner. “I think they are ready,” says Vermeulen. “Part of the process is owning where you are at that moment in time and standing behind it with full confidence that you did the best you could with your full intent.”

Jeanne Robinson, one of the Open Your Art painters, took part in the retreat as a way of committing to her practice. “They made the whole experience unforgettable,” says Robinson. “The art training was superb. I learned so much from Marleen’s demonstrations. She’s very generous with her gifts.” The participants bonded during the retreat and upon returning to the Coast, Robinson suggested they sign up for the Crawl as a way of keeping the group going and giving them a goal to work toward. This will be Robinson’s first public exhibition. “It’s scary,” she says. “For a while I felt like an imposter because everyone else has so much experience, but I think all together, we’re going to put on a pretty good show.”

The Sunshine Coast Art Crawl runs at various venues from Langdale to Earl’s Cove Oct.21-23. For complete details, including a list of venues and participating artists, visit sunshinecoastart
crawl.ca