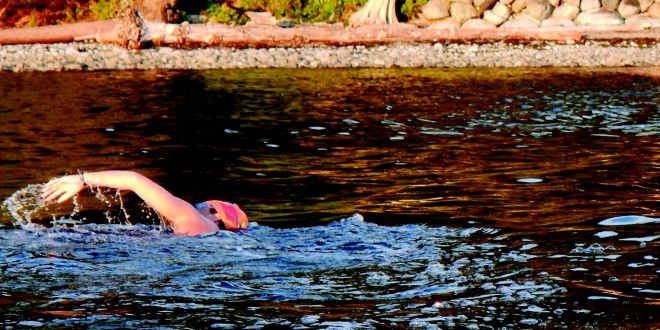 Swimmer makes the Strait in a day 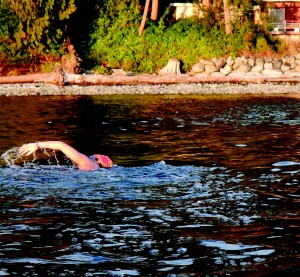 Rachel Schoeler finishing the swim at Reception Point, West of Mission Point on August 16. The water athlete swam from Nanaimo to the Sunshine Coast in just short of 12 hours to raise awareness about swimmable water quality. Photo submitted

Open water swimmer Rachel Schoeler made history on Saturday night when she completed a gruelling 35 km swim across the Strait of Georgia. The swimmable water advocate left Nanaimo on Saturday at 8 am and came ashore at Reception Point near Sechelt just before 8 pm the same day.

“I was so excited to see land and actually touch it,” the Salish Sea conqueror said, “It was hard to climb out onto the rocks, after being almost 12 hours in the water, it’s kind of hard to stand,” she explained.

Schoeler had planned to end at Mission Point near Davis Bay.

“At about half way we thought we would make Misssion Point, but the currents changed and we ended up at Reception Point,” Schoeler noted. “In the middle for about two and a half hours, we didn’t move anywhere … and every time we stopped for a break we actually moved backwards.”

She notes it took a lot of concentration to keep swimming. Scholer said her coach helped her accomplish the feat of endurance with mental as well as physical training.

“There was a tough point at the middle where I told my captain and crew not to talk to me about distance and time just so I could stay in the zone,” the UBC student shared.

Schoeler raised $17,000 so far for an awareness campaign with Fraser Riverkeepers advocacy group, through pledges for her swim.

“I think we reached a lot of people about water quality issues.” Schoeler said.

The team was glad for the calm seas and mostly sunny skies. “It was huge to have the sun on my shoulders for most of the day,” she said.

The water was warm which was key, since she wasn’t wearing a wet suit.

“I thought I would be colder but it wasn’t too bad,” Schoeler said. Open water swimmers crossing the English Channel adhere to a code where no wet suits or aids be used during the swim, and that was something Schoeler wanted to do in keeping with the feats of other endurance swimmers. Schoeler is only the second woman known to have swum across the Strait of Georgia, since Fran Cannon performed the feat in 1972.