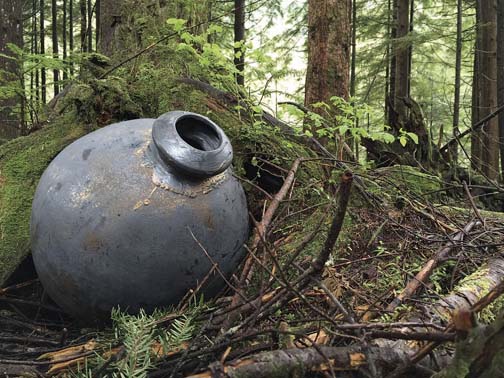 The art of burying treasure

Posted by: The Local Weekly September 16, 2015 in Arts & Entertainment Leave a comment 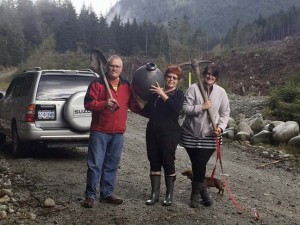 Jan, Liz and Hanelize de Beer are pictured in the act of burying the treasure on the Sunshine Coast. Photos submitted

A new exhibition opening Sept. 17 at the Gibsons Public Art Gallery contains an element of treasure that is actually buried.

One of the works is called “Buried Treasure”.  Jan took one of his wife Liz’s big pots, and buried it on a mountainside on the Sunshine Coast while his daughter Hanelize photographed the process. The photos exist as metal panels attached to a metal frame – which is part of the show.

“My own background (is) in conceptual art,” said Jan de Beer. “I love the work of Marcel Duchamp, whom I consider to be the Father of this type of art.  It is almost 100 years ago that Marcel exhibited a urinal as art, thereby challenging the notion that art has to be precious and placed on a pedestal.

“With this work I took a precious piece of art from my wife, who is an established potter, and buried it in the forest.  My daughter Hanelize recorded the process with photography.  It poses the question: whether the work (pot) ceases to have artistic merit when it is out of sight and buried.”

The metal panels and frame are for sale at $850 but de Beer says the large  amphora he buried would typically sell for about $1,000.

“The GPS coordinates have been recorded and the purchaser may choose to excavate the work if they find it,” he said. “A marker has been placed at the burial site.  The pot was buried at the beginning of spring and should be intact at this time, but freezing in the winter may pose the risk of breaking.  The challenge for the purchaser would be to find it and to dig it out if he or she chooses, without breaking it.”

Or the purchaser could leave it on the mountain. “The work may stay buried forever as the true essence of ‘paradigm’ is its absence.”

Along with the “Paradigm” exhibit, a parallel show in the Eve Smart features the work of Vancouver artist Gina Miller called “Interior Geography”.

Inspired by the British Columbia landscape and the urban geography that surrounds Miller’s East Vancouver studio, these works feature organic shapes and nature-derived palettes, as this urban artist often seeks solace in the water, forest and sand of nearby lakes, mountains and beaches in the Gulf Islands and on the Sunshine Coast.  This duality of place, urban and organic, frames Miller’s painting practice.

Both exhibits will be at the gallery until Sunday, Oct. 11. The opening reception will be held Saturday, Sept. 19 2-4pm.  The gallery is open Thursday to Monday, 11am-4pm.

2015-09-16
The Local Weekly
Share !
Previous: ‘Plein air’ captures scenes in the moment
Next: Author details shadow side of RCMP culture