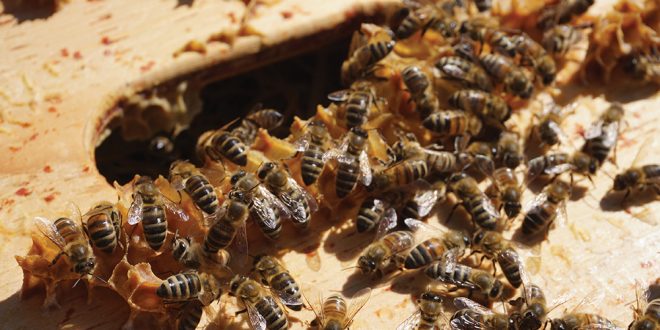 Posted by: The Local Weekly May 22, 2019 in Business Magazine Leave a comment 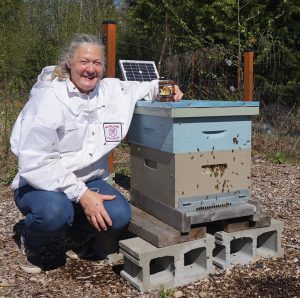 Kathleen Suddes loves her bees. Heading into winter, the owner operator of Roberts Creek Honey had 92 hives that, in a good year, produce around 75 pounds of honey. Those 92 hives, at the peak of the season, represent around 5 million bees located in various acreages along the Sunshine Coast, including 10 hives at Persephone Brewing in Gibsons. In exchange for having the space to store her hives on Persephone’s property, Suddes provides them with honey for their beers. “It’s a serious addiction,” Suddes says of beekeeping. “It’s a multi-sensory experience—you hear them, you smell them and feel them. You really become attached to your bees.” So it hit Suddes particularly hard to lose over 40% of her bees over the fall and winter to wasp attacks and harsh winter conditions. In fall, just as queen bees are putting down larva physiologically designed to survive the winter and keep the hive alive, wasps are on the hunt for protein to keep their own queens alive over the winter. “The bee hives are like a protein buffet for the wasps. They just savage them. And then we had February,” Suddes says, recalling the prolonged cold and snow of this past winter. “For the weaker hives, that was more than they could handle.” It was a hard winter for bees across the province, and while the BC government survey with actual numbers won’t be released until late May, Suddes has been talking with many keepers and believes that, “anecdotally, losses are anywhere from 50-70%.” Those are devastating losses for an industry is that already facing numerous challenges. 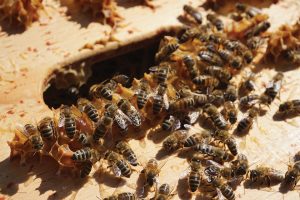 While there are a number of hobbyist beekeepers on the Sunshine Coast, there are only three commercial ones with Roberts Creek Honey being the only one who sells honey retail. On Wednesdays, you will find Suddes selling her products at the Roberts Creek Market. “We don’t have agriculture on the Coast,” explains Suddes of the small number of beekeepers. “We have hobby farms, acreages, the odd facility like Persephone. It’s not like the Fraser Valley or the Prairies.” Suddes’ hives are spread throughout 10 different yards on the Coast, and she limits the number of hives at any one yard to 10. “I couldn’t put all my hives in one yard because there’s not enough forage for the bees,” says Suddes. With the increase in residential development on the Coast, her bees are losing even more food sources. Other factors stressing bees include climate change, insecticides, pesticides, and parasites, like the varroa mites that have been linked to colony collapse. Beekeeping is not considered farming, so here on the Coast, bees, and the humans that keep and rely on them, face recurring summer drought conditions and strict water restrictions.

With bees under various environmental stressors, beekeepers are also feeling the pressure. With her hives down to around 50, Suddes will have very little honey to sell this spring. “Honey production is not particularly sustainable,” she says, noting that Canadian producers make very high quality honey. “It’s expensive to produce [and] you’re competing against grocery stores and cheap imported honey.” According to Suddes, beekeepers are always looking for “value added” – other ways of making income. Even small beekeeping operations can be in demand for pollination contracts, moving their hives to pollinate food crops like lucrative blueberries. “They are the ones doing the pollination contracts,” says Suddes of beekeepers. “If we start driving them out of business because they can’t afford to keep their operations going, then it really does impact food production. Beekeepers provide an essential role in our food sustainability. Even here on the Coast, there’s all kinds of pollination happening.” 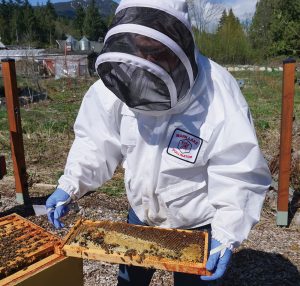 With spring comes hope and renewal, and Suddes’ remaining hives are busy getting ready for a new season, hatching broods, gathering pollen and nectar, and making honey. One hive is doing exceptionally well and will need to be divided before it swarms—an indication that the colony is outgrowing the space in its hive. After her winter losses, dividing a colony that is flourishing is one way Suddes will be able to increase the number of her hives. Buying queens from breeders and starting new hives is another option. Suddes completed the BC Bee Master program and is a BC Honey Producers Certified Instructor. As part of her “value added” strategy, Suddes makes infused honeys, sells propolis, an anti-microbial compound that bees make from tree resin, teaches, and gives workshops.

“Look at your garden as a dinner plate,” says Suddes. “If it doesn’t produce a seed or a nut or a fruit, then it’s not likely to provide nutrition to a pollinator, and we can all use a little help.”