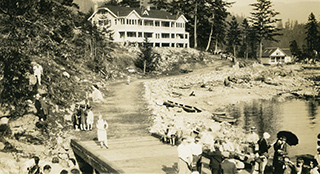 Posted by: The Local Weekly August 16, 2017 in Local Community Leave a comment

Did you know that the first hospital on the Sunshine Coast was located in Garden Bay? For many residents, St. Mary’s Hospital was the location of many important life events. It was also a significant milestone in the history of the Sunshine Coast, but getting a community hospital wasn’t easy.

In the early 1900s, the Columbia Coast Mission provided medical care to remote Sunshine Coast communities by boat. Many of those requiring medical assistance were located in isolated logging or fishing camps and it was these communities that pushed for a hospital. As the Mission ships did not have the resources for serious medical care, injured workers requiring hospitalization would have to be brought to Irvine’s Landing where they would wait for the next steamship to Vancouver. 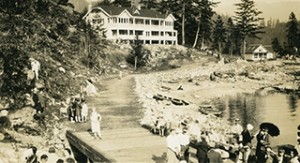 St.Mary’s Hospital in Garden Bay is seen on the day of its dedication, Aug.16, 1930. SCMA photo

On August 16, 1930, St. Mary’s Hospital opened in Garden Bay. The need for a hospital was met through community collaboration with the Columbia Coast Mission and St. Mary’s Anglican Church. It was a simple two-storey building with 12 beds, one doctor, two nurses, and two other staff. The hospital was truly a community effort: not only was the land donated, numerous community members donated labour, materials, and time to build the facility.

Although convenient for camp workers, the hospital location proved difficult for many residents as there was no road access to Garden Bay until 1936. By the 1960s, the lower Sunshine Coast communities had grown significantly, increasing the demand for hospital services. The coast was quickly outgrowing the small hospital and the need for a more centrally located hospital was recognized.

St. Mary’s Hospital relocated to Sechelt in 1964, on 11.2 acres of land generously donated by the shíshálh Nation. Since then, it has continued to grow and change.  In 2015 the hospital’s name was changed from St. Mary’s Hospital to Sechelt Hospital in the spirit of reconciliation and to honour the nation for their generosity.

Without the community efforts of early Sunshine Coast residents, we wouldn’t have the access to medical services that we do today. It was the result of this dedicated effort that demonstrates the power of community in implementing change.