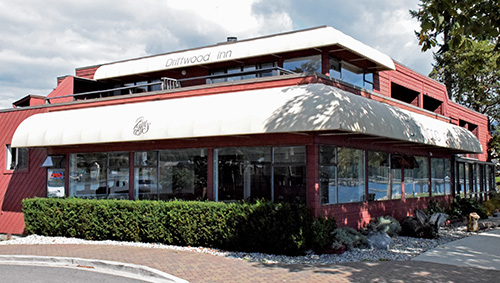 The Driftwood: Oceanside inn builds on a long history

One of the more enduring establishments on the Sunshine Coast is getting a makeover.

The Driftwood Inn, located for nearly 50 years at the foot of Trail Avenue, is already looking brighter, with updated décor in its Pebbles Restaurant and banquet room—and more improvements to come—under the direction of new general manager Jackie Coombs.

“All the furniture in the restaurant is brand new,” said Coombs, who joined the Driftwood in March after 15 years as food and beverage manager at the Sunshine Coast Golf and Country Club.

“Certainly, with a restaurant in such beautiful, oceanfront surroundings, everything on the inside has to match the outside, and highlight the view,” she added. “We’ve uncluttered the room and brought in furniture that is bright, modern and minimalist. It’s a lot fresher.”

The menu has also been revamped, Coombs noted, with “a return to comfort food.” 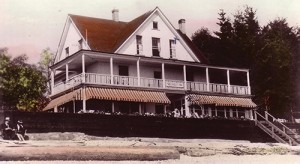 The hotel as it looked in the 1940s. Photo courtesy Gary Little

The waterfront site makes the 29-room Driftwood the only true beachside inn on the Sunshine Coast, south of the Rockwater in Secret Cove.

In fact, the Trail Avenue location has been the site of a hotel for the better part of 90 years, at least. Two versions of the story are left to us from days past. One has it that in 1906, a grand family home was built there by Bert Whitaker, cousin to Edric Clayton, of what was later to be the supermarket family. The other version says that Whitaker had it built in 1899, and from the start, intended it as a hotel, the 20-room Sechelt Inn.

What is not in dispute is the fact that the Whitakers sold it (along with the family’s many other Sechelt properties) to the Union Steamship Company in 1926. The hotel expanded to 38 rooms and accommodated guests for decades until fire destroyed it in 1963. The Driftwood was built on the property in 1970.

The new owners, who live in West Vancouver, bought the business late in 2016. They brought Coombs on board months later to oversee the building’s extensive refurbishment, which will extend well beyond the restaurant area.

“There’s so much more to do,” Coombs said. “We’re renovating all the waterfront rooms initially. The rest of the building [running parallel to Trail Avenue] also will eventually be redone.”

Key among those waterfront room changes is the complete renovation of a three-bedroom, split-level penthouse suite above the restaurant. Artwood Custom Homes is spearheading the project, which includes the addition of an extra bathroom, fireplace and a fully equipped kitchen, finished with countertops and a long dining table, all topped with granite.

“The whole property itself so beautiful,” said Coombs. “It needs some love now on the inside, and that’s just what the new owners are giving it.”  Rik Jespersen