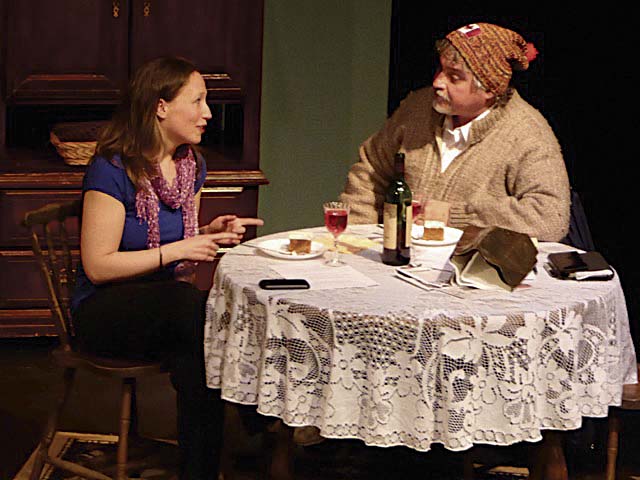 ‘The Grandkid’ is a grand production

Posted by: The Local Weekly April 1, 2015 in Arts & Entertainment Leave a comment 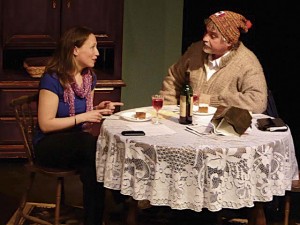 Laura Simons and Brian Harbison in the Driftwood Players’ presentation of The Grandkid. Bill Forst photo

I caught a preview of The Grandkid, presented at Heritage Playhouse by our own Driftwood Players, featuring Brian Harbison and Laura Simons. This is a challenging, tender, witty play by well-known Canadian writer John Lazarus and a wonderful example of the enormous contributions of the entire production team. The set was detailed, completely convincing as the living room of a middle-class Jewish household, the costumes perfect, the sound and lighting spot-on. The actors rehearsed intensely for three months to master the often-subtle dialogue. Because of the frequent scene and costume changes (toque to yarmulke, sometimes both at once), the play ran a little long, but the inter-act music was so outstanding that it did much more than distract from the shuffle. Recordings of the superb clarinetist Mark Simons (brother of Laura!) and Mazik, a Klezmer group from Montreal, filled the darkened theatre with sinuous sound and toe-tapping rhythms that added greatly to the experience.

Laura Simons nailed Abby’s understated intelligence, her easy, Canadian-youth brand of physicality, her generation’s idealism and squeamishness about overt sexuality. She’s a typical college kid, but add to that her Canadianisms (Hockey! Beer!) and the Jewishness that runs deep in her psyche. Brian Harbison has exactly the right twinkle in his eye for the complex role of Julius. He is a concerned granddad, grieving widower, artist, boomer, Zionist, rake, a man facing his own mortality. He has secrets. Many wonderfully descriptive Jewish expressions are used (there was a helpful glossary in the program).

I developed a real affection for these two characters. Their bond was portrayed unerringly, despite points of contention that range from humorous to deadly serious. Granddaughter and grandfather call each other by their shared last name, “Rothstein,” and have since she was a tiny girl. Some delightful quirkinesses emerge—such as “Rothstein the Snowman” which is based on the very young child’s mis-hearing of “Frosty”— and stick, the way these things do. They share games like one in which they make up new words by combining sounds. One of the best laughs of the night comes from the child Abby’s “fun” plus “lucky”. These back-in-time moments were presented quietly, throughout the production. The actors, changed into formal, “Shul”-going clothes, (Abby as a grown woman), walk onto the stage from opposite sides into spotlights, and speak these memories from their own perspectives. I came away pondering politics, forgiveness, generation and gender and how much richer life is when children can really know their grandparents as people who strive, dream, fail, and have flaws, instead of just last-ditch childcare and obligatory holiday visits.