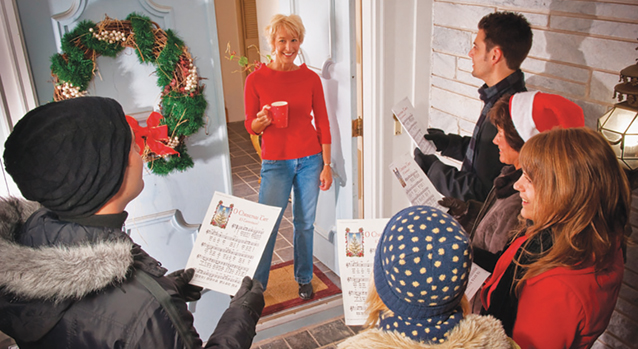 The history of carolling

Posted by: The Local Weekly December 18, 2019 in Home & Garden Leave a comment

The festive nature of the holiday season makes it an ideal time to sing, especially in groups. Perhaps it’s no surprise then that carolling, a tradition that dates back many centuries, ultimately collided with Christmas.

Carolling and Christmas carolling are two different things. According to History.org, the origins of modern Christmas caroling can be traced to wassailing, a term that has evolved for more than a millenium. What started as a simple greeting gradually became part of a toast made during ritualized drinking. Time magazine notes that the word “wassail,” which appeared in English literature as early as the eighth century, eventually came to mean the wishing of good fortune on one’s neighbors, though no one can say for certain when this particular development occurred.

During medieval times, farmers in certain parts of Britain would drink a beverage to toast the health of their crops and encourage the fertility of their animals. By 1600, farmers in some parts of Britain were still engaging in this ritual, and some were by now taking a wassail bowl filled with a toasting beverage around the streets. These wassailers would stop by neighboring homes and offer a warm drink, all the while wishing good fortune on their neighbors.

During this period, wassailing had nothing to do with Christmas, but that began to change in Victorian England, when Christmas became more commercialized and popular. It was during this time when publishers began circulating carols, forever linking the tradition of wassailing with Christmas.

Christmas carolling as Victorian Englanders knew it might have fallen by the wayside. But while carollers may no longer go door-to-door singing Christmas songs and wishing their neighbors good fortune, those intent on seeing the modern manifestation of this tradition that dates back more than a millenium may be able to find some carollers at their local mall or church.

2019-12-18
The Local Weekly
Share !
Previous: The Blues Songs of Christmas
Next: Coast exchange student in Sweden