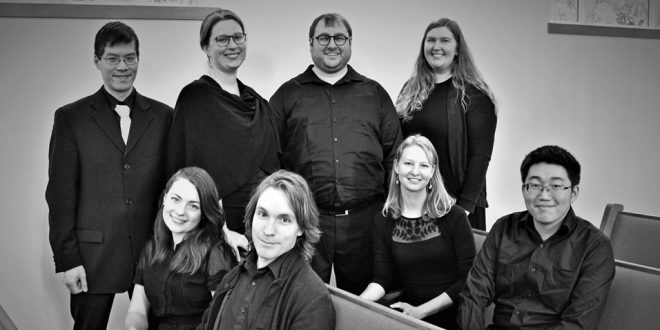 Posted by: The Local Weekly February 19, 2020 in Arts & Entertainment Leave a comment 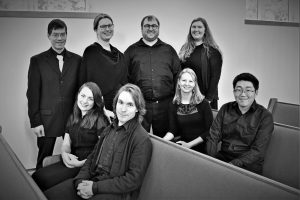 Some of the members of MOTET, who are working to popularize church music. This weekend, MOTET is presenting a version of its first concert 10 years ago. Photo submitted

On Feb. 22, 2010 the four founding members of MOTET launched an ambitious project: to share the vast treasures of church music across the Lower Mainland. They lamented that such music was sadly absent from many concerts and – more surprisingly – most churches in the area. Seeking a renewal of the sacred, their inaugural concert juxtaposed the music of Maurice Duruflé with renaissance polyphony, tied together with Gregorian chant – a program now being reimagined 10 years later.

On Feb. 21-22, 2020 MOTET Chamber Choir (now 12 voices strong) presents a program for the Feast of the Chair of St. Peter. On this day, we celebrate the role of St. Peter and his successors as the “Vicar of Christ” to the church. The concert features music drawn from the First Vespers and Mass liturgies of the feast, including works by English polyphonic master William Byrd, French perfectionist Maurice Duruflé, and their respective contemporaries.

William Byrd is a particularly iconic figure in the history of church music, being employed by the Church of England while secretly writing troves of music for the Catholic Church. The excellence with which Byrd composed permitted his career in the Protestant courts to flourish despite his known Catholic faith.

Maurice Duruflé was a perfectionist, leaving us with an incredibly small oeuvre of intricately composed choral and instrumental works. Duruflé eschewed contemporary idiom, and sought rather to root his work in tradition: his choral works all draw from medieval Gregorian chant – often quoted verbatim – making them innately Catholic.

You can hear MOTET weave the music of these two composers amongst works by Lassus, Batten, Morales, and Howells on Saturday, Feb. 22, 2:30pm at St. Mary’s Church, 956 Gibsons Way, in Gibsons. Admission is by donation, and all ages are warmly welcomed. (The concert will also be performed Friday, Feb. 21, 8pm, at St. Augustine’s Church, 2028 W. 7th Ave, Vancouver.) www.MOTET.ca

2020-02-19
The Local Weekly
Share !
Previous: Our libraries reflect our communities
Next: “The Guilty”: 85 minutes of tension