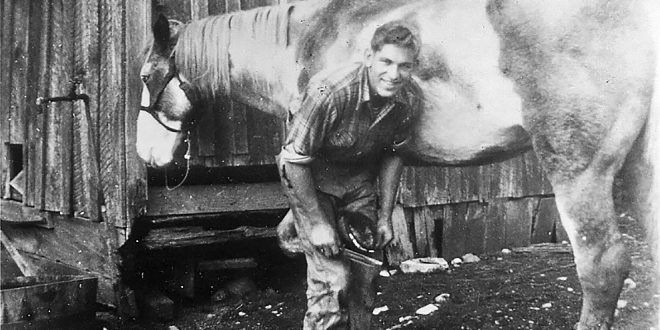 The stories that they tell

Certain people can take you back in time when they tell a story. Jeff Newman was one of those people. Suddenly, you are there with him in a fishing boat reeling in a 72-pound lingcod or watching him ride a horse up the steps of Elphinstone High School, much to the chagrin of the teachers.
Born on Sept. 8, 1934, Jeff arrived on the Sunshine Coast in 1940 and lived in a cabin on Crowe Road in Roberts Creek with his adoptive parents. Upon swimming every day with the other children in the area, Jeff’s first impression was that “he had it made” in his new home. His chores included delivering milk, for which he was paid 35 cents a week, the only caveat being that he bought a war savings stamp every Monday. Luckily, Jeff mused, he had enough money left over to buy two 5 cent ice creams! Jeff attended East Roberts Creek School and soon became an avid reader, something he would keep up his whole life. Coastal renaissance man Hubert Evans soon took Jeff under his wing, bringing him out fishing in his hand-built double-ender rowboat (currently on display at the museum). Indeed, Jeff’s early life was full of West Coast adventures and hijinks.
Sharp as a tack in his early
eighties, we spent several days with Jeff Newman processing his photos and archives for our collection. We also took the opportunity to record an oral history interview with him on his life and times on the Sunshine Coast (1940s-50s). To hear Jeff speak about pulling in that lingcod or riding Apache up the steps of Elphinstone High School is to travel back with him to those moments of his life. Through his storytelling, Jeff was able to provide a direct connection to the historic places and people on the Sunshine Coast with vivid precision. It wasn’t so much about the intricate details but more about the joy he seemed to have reliving these memories. And through the process, we were able to share that joy with him.
Sadly, Jeff Newman passed away earlier this year at the age of 86 years old. We have compiled some audio clips from our interview with Jeff and posted them on the Museum’s Soundcloud account (accessed via SCMA website). Celebrate Heritage Week 2021 February 15-21 by listening to some community storytelling, including Jeff Newman’s stories. This one’s for you, Jeff!