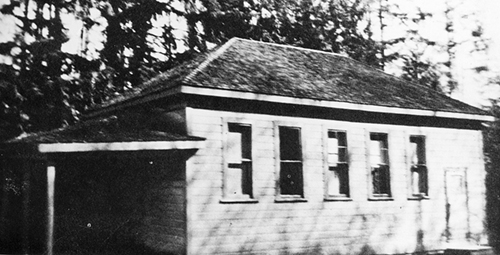 The very first school in Gibsons

Posted by: The Local Weekly September 19, 2018 in Local Community Leave a comment 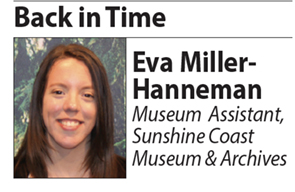 Do you know how the first school in Gibsons came to be? The need for a school was recognized in the late 1880s, as more settlers began to move to the Sunshine Coast. According to Les Peterson’s “The Gibsons Landing Story”, until a schoolhouse could be built, classes were held in “a small log cabin… about 500 feet from where the [Gibsons] wharf now stands”.  The process of bringing a proper schoolhouse to the area was truly a community effort. 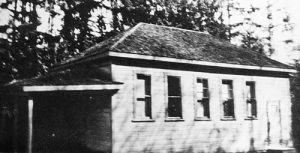 The first school in Gibsons opened in 1891, and the 23 students walked to class. SCMA photo

In order for a new school to be built, the ‘Howe School District’ had to be established; some of the early trustees included James Fletcher and George Gibson. Next, land was acquired at the top of School Road and a permit was granted for a 20×34-foot building. To build the structure, various community members came together to help.  Henry Smith hauled lumber up from the wharf with oxen, and James Fletcher and George Glassford built the chimney.

On January 19, 1891, the first school in Gibsons Landing officially opened, at what is now the corner of School Road and Highway 101. At the time, the Department of Education valued the building at $25 and the land at $700. The ‘Howe Sound School’ had a total of twenty-three students. The one-room school consisted of painted wood for the blackboard, handmade wooden desks and a large wood-burning fireplace in the centre of the room. Before roads were plowed and school transportation organized, students would walk from all over to attend the school in Gibsons Landing. Our oral history collection includes a story from a local resident who would be pulled to school by his father in a sled on cold winter days.

We have come a long way since the development of the Sunshine Coast’s first school, but our community’s dedication to quality education remains today. Currently on display in the Museum’s education exhibit are floorboards from the original Howe Sound School; drop by to learn more about the history of education on the Coast.