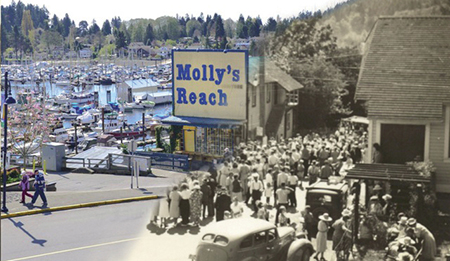 Then-and-now views at the Museum

Posted by: The Local Weekly July 19, 2017 in Local Community Leave a comment

Working at the Sunshine Coast Museum, staff have a unique vantage point to witness the face of a changing coast. Within our collection is a veritable treasure trove of archival documents that paint the history of our region in vivid colour. If you are attentive and listen closely, they tell stories of inspiration and heartbreak, often providing multiple perspectives that help fill in the blanks to improve historical accuracy.

Archival documents can also illuminate trends in human behaviour that surface again and again. This often takes the shape of community conversations recast in a new light by generational and cultural change. Most recently, it was the BC government`s fixed link study that inspired some historical research, leading us to the newspapers of the 1950s where we found articles that could have been published yesterday. They contained the same community conversation that is occurring today about the need for a permanent, driveable connection to the Sunshine Coast. It was uncanny – if you covered up the date, it was hard to tell if the article was from 1958 or 2017. This inspired us to begin researching and developing our latest feature exhibit called Fixed. 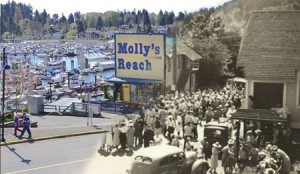 A then-and-now look at the main intersection in Lower Gibsons, a photo-blend created by Justin Samson and Cody Robinson using an historical photograph from the museum. SCMA photo

During the process, I often thought of the contextual differences from the 1950s to the present day. In 1951, the first car ferry had just been introduced, bringing an increasing number of automobiles to the Sunshine Coast. Not surprisingly, it appears that the increase of coastal cars was the spark for the community dialogue, focussing on the creation of a road to Squamish. Today, we observe that the Vancouver housing boom is likely playing a role in the fixed link conversation as affordable land in the Vancouver area diminishes. One contextual commonality that we observe is that in both instances (late 1950s and 2016), British Columbia was gearing up for a provincial election, perhaps another motivating factor in the fixed link dialogue.

Come on down to the Sunshine Coast Museum to explore our latest exhibit Fixed and learn more about the historical context of this fascinating conversation.

2017-07-19
The Local Weekly
Share !
Previous: Time to get into your summer reading
Next: Still available