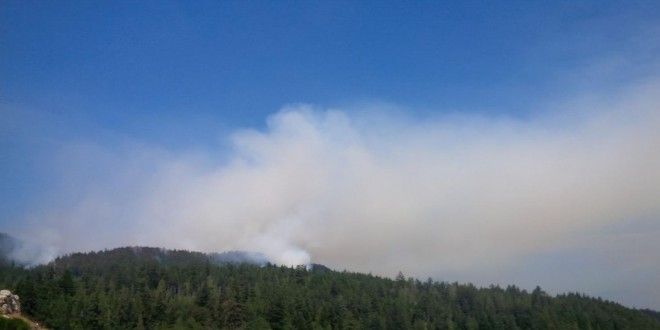 The Sunshine Coast Community Forest (SCCF) is well in the black this year, thanks to better than expected recovery of logs from the area burned in the 2015 Sechelt mine fire, and strong international prices.

“It was a pleasant surprise,” said Glen Bonderud, chair and president of SCCF, reporting to Sechelt Council on September 6. Due to the necessity to salvage logs from the two-year-old burn site, SCCF had budgeted for a loss.

“The quality of logs [was] better than we thought – damage superficial in some cases,” said Bonderud. He also noted that international lumber prices picked up in 2017, with cedar reaching an all-time high.

His written report to council stated: “The sales prices are a result of demand and supply, a strong US housing market, continued demand out of China and other world markets, notably Japan.”

The Community Forest had expected to sell the recovered wood for an average price of $75 per cubic metre, but instead received an average selling price of $130. So rather than seeing a net loss of $273,612 at the end of June 2017, SCCF recorded a net income of almost $750,000.

Recovery of wood from the burn is complete, but not all of the harvested material has been sold yet. Bonderud said he would have final numbers on the value of the burn cut at the end of the third quarter.

In response to questions about what dividends the District of Sechelt (which owns SCCF) might expect at year end, Bonderud said no decisions would be made until audited financial statements for the full 2017 year are available, most likely in February or March of 2018.

Bonderud said that the north side of the burned area is now fully replanted, and the south side is about half replanted.

Bonderud also invited council and the community to attend SCCF’s annual Wood Expo on Saturday Sept. 16 from 10 am to 5 pm at the Seaside Centre. The event includes artists, carvers and furniture makers demonstrating the many uses of wood.  Donna McMahon