Those interested in the progress of the Trellis/Silverstone seniors care facility project will need to keep a close eye on Sechelt.ca. The bylaws related to the controversial project were the subject of an 80-minute public hearing on July 28 and it is not clear when Sechelt council will move to a final decision.
(The Trellis facility was not on the agenda for the Aug. 5 council meeting, although the agenda was open to change. If not considered on August 5 or at any special council meetings called during the remainder of council’s scheduled August break, the next opportunity for the hearing details and bylaws to come forward would be at council’s Sept. 2 meeting. The agenda for that event is scheduled to be released on Aug. 28.)
Due to physical distancing requirements to help stop the spread of COVID-19, the hearing was held online using the Zoom platform. Less than 20 members of the public expressed their views about the proposed bylaws related to the 136-bed privately operated residential care facility. (Of those beds, 125 would be provided under contract to Vancouver Coastal Health for publicly-funded care.)
The bylaws would adjust the Official Community Plan designation and zoning of a portion of two land parcels in West Sechelt, near the intersection of Derby Road and Cowrie Street for the project. 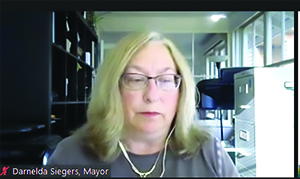 In opening the hearing, Sechelt Mayor Siegers reminded all involved that its purpose was to garner input on the bylaws and their impacts on area land uses. She stated that it was not a forum for debate on health care funding models or the merits of private versus public care for seniors. She warned participants that if they strayed off-topic, she would end their speaking opportunity.
Those statements became the focus of accusations of District bias by two individuals. Earlier in the proceedings, Siegers allowed a number of members of the medical community and others to talk about the need for the facility and the demand for seniors’ care on the Coast in their presentations. The two follow-up speakers said they felt that those comments were not related to the land use bylaws. They alluded to bias on the part of Siegers, potentially in favour of moving the project forward.
Tillicum Bay Neighbourhood Association president Lynne Forrest, who was in the hearing audience, stated she believes that there were problems with how the session was conducted. The association also submitted written comments to the District on July 28. That document identified “omissions and inconsistencies in procedure which may lead to costly legal precedents and the destruction of neighbourhood plans”. Concerns were cited about parkland dedications, trail system links as well as the timing and costs of the planned sewer expansions related to the
project.
Another land use concern that was raised at the hearing focused on vehicle access to the proposed site. Several residents of the Trail Bay Estates neighbourhood stated that the proposed West Sechelt connector road between that area and downtown Sechelt should be in place before the Trellis project is built. Their concerns related to the impacts of construction traffic – and eventually facility workforce and visitor traffic – travelling through a residential neighbourhood on a road not designed for those types of volumes. One individual went as far as to say that Trellis should be asked to pay for the construction of that new connector road. Connie Jordison