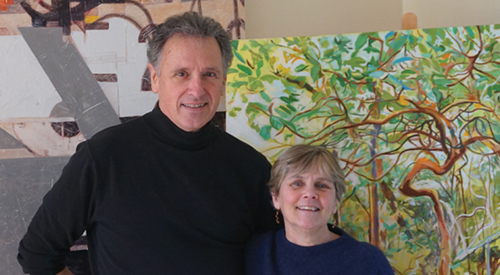 Visual artists on the Sunshine Coast

Kim and Carol LatFave arrived in Roberts Creek 26 years ago and ever since then, they’ve been an active part of the Sunshine Coast’s visual art community. Like many artists, they started drawing when they were kids. “You know how some people, they draw, then they stop?” asks Carol. “Well I never stopped.” Adds Kim, “Guess we never grew up,” though the truth is they have matured as artists and people, and have done so at each other’s side since first meeting at Capilano College’s (now Capilano University), fledgling art program in 1973. They were fresh out of high school, Kim having grown up in North Vancouver, while Carol, an air force brat, had moved around a fair bit before settling in Vancouver. After a stint at the Alberta of College of Art, Kim wanted to develop his career in illustration. “Back then you really couldn’t do it out West,” he says. “You had to go where the industry was.” It was 1978, so they got married, loaded up their pick-up truck and drove to Toronto. 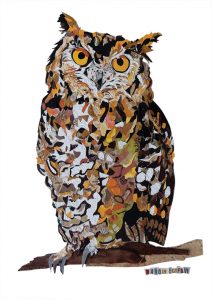 Kim’s career took off, picking up plenty of freelance work doing advertising for big name clients like Hewlett Packard, American Express, and Bell Mobility to name a few, and receiving several awards for his work along the way. He also did some work for Harrowsmith Magazine and when publishers James and Eleanor Lawrence got into publishing kids’ books, Eleanor asked Kim if he wanted to illustrate some manuscripts. “It’s a small industry,” says Kim of publishing books for children. “Once you have a book out all the other publishers become aware of you.” One such publisher was Patsy Aldana at Groundwood. She handed Kim a stack of manuscripts to go through. One of those manuscripts, Amos’s Sweater, by Janet Lunn won Kim the Governor General’s Award for Illustration, the Ruth Schwartz Children’s Book Award, and the Amelia Frances Howard-Gibbon Award. Another book he illustrated, Shin-chi’s Canoe, by Nicola I. Campbell, won the TD Canadian Children’s Literature Award and was a GG finalist for illustration. “With advertising, you’re just one little cog in a wheel,” says Kim “But with a book project you’re left to sort through things. It’s much more involved and interesting.”

During their time in Toronto, Carol discovered she didn’t like commercial freelance work. “I’m shy and you have to get out there and sell yourself,” she explains. She was raising their children and painting watercolours of Toronto’s inner city in her spare time. A friend of theirs had opened up a gallery in Yorkville and Kim encouraged Carol to show him her work. “She was doing these really beautiful watercolours of Kensington Market,” remembers Kim, telling the story as Carol seems too humble to tell it herself. “It didn’t even make it onto the walls. He sold it all off the floor.” This early success froze Carol. She packed everything up and didn’t paint again for almost 10 years. “All of a sudden you’re painting for somebody and you’re getting in your head and nothing looks good enough,” recalls Carol. “I got in my head.” 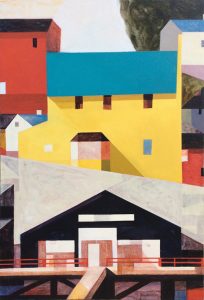 Kim’s desire to move back West and Carol’s wish to own their own home, saw the couple buy a piece of land in Roberts Creek, and scrape enough money together to build their house. They moved in in 1992, each with their own studio space. Kim’s is above the garage where he continues to illustrate about one book a year, but he’s also started to paint more. “I found painting was becoming much more interesting, much more personal, more open-ended,” he says. Carol took up painting again at first, but has moved on to collages which have proved exceedingly popular. Her collages of cityscapes, animals and even portraits, have her piecing together hundreds of bits of paper to form one unified whole. From a distance, it’s sometimes hard to tell that her work is a collage. This time, she’s better prepared for success. “I’m finding the commissions almost easier,” she says. “I almost felt lost after having no commissions because now I have to make up my own,” she laughs. Her work is unique and requires a capacity for seeing the world in bits and pieces. “Carol will say ‘I’m going to do this,’” says Kim. “It doesn’t register with me. What’s there to create an image out of and then she works on it, and I get it. She has a totally different way of seeing.”

While the couple doesn’t work together on projects, they support each other’s work and respect each other’s space. “I think I’m much more needy,” says Kim, who admits to frequently asking Carol for feedback. “It’s great having Carol be another set of eyes to get perspective on things.” Carol agrees. “I think we’re both good at critiquing each other honestly,” she says. Carol is preparing for month long shows in May at Mad Park Bistro in Madeira Park, and in June at The Gumboot in Roberts Creek. Both are members of Eleven Equal Artists who produce the Power of Paint exhibition every August, and together they participate in the Art Crawl every October. As they celebrate their 40th wedding anniversary, one of the Coast’s premier art couples seems poised for the next chapters of their lives.
www.kimlafave.com
www.carollafave.ca